Furious Prayer for the Church I Love and Have Always Loved but Which Drives Me Insane with its Fussy Fidgety Prim Tin-eared Thirst for Control and Rules and Power and Money Rather Than the One Simple Thing the Founder Insisted On.

Granted, it’s a tough assignment, the original assignment I get that. Love—Lord help us, could we not have been assigned something easier, like astrophysics or quantum mechanics. But no—love those you cannot love. Love those who are poor and broken and fouled and dirty and sick with sores. Love those who wish to strike you on both cheeks. Love the blowhard, the pompous ass, the arrogant liar. Find the Christ in each heart, even those. Preach the Gospel and only if necessary talk about it. Be the Word. It is easy to advise and pronounce and suggest and lecture; it is not so easy to do what must be done without sometimes shrieking. Bring love like a bright weapon against the dark. The Rabbi did not say build churches, or retreat houses, or secure a fleet of cars for general use, or convene conferences, or issue position papers. He was pretty blunt about the hungry and the naked and the sick. He was not reasonable; we forget this. The Church is not a reasonable idea. The Church should be a verb. When it is only a noun it is not what the Founder asked of us. Let us pray that we are ever after dissolving the formal officious arrogant thing that wants to rise, and ever fomenting the contradictory revolutionary countercultural thing that could change life on this planet. It could, you know. Let’s try again today. And so:amen.

by Brian Doyle, A Book of Uncommon Prayer. 100 Celebrations of the Miracle and Muddle of the Ordinary, 2014

The Muddle
A man named James who sits in his wheelchair in Harvard Square. I pass him every time I walk from the subway to where I get my hair cut. I only see him once a month, but I look forward to it. James is a lovely man with multiple handicaps, a gentle soul, and a smile from heaven. You could say James is homeless, disabled, an amputee, a street person, a beggar just looking for the next drink. You could discount him, as some do when they bustle by. I know he lives someplace where he is taken care of, and that someone brings him daily to his spot. He’s not an aggressive man, and he doesn’t call out or rattle a cup of coins for attention. But boy, when James smiles you know the world is his proverbial oyster—and you are the only one who matters at this moment. And James knows how to ask for what he needs. This is the part of the biblical wisdom we do not easily engage: asking and receiving are related, part of a whole. Once James asked me to marry him, and once he stammered, “ I love you” and motioned to me to lean towards him for a kiss. He is a person who matters, and I am not the only one who notices James.

The Miracle
Google-godde came to the rescue. James made it online. A Harvard senior, George David Torres, befriended him. James told Torres that he needed a new wheelchair. He asked. In the midst of Torres’s final exams he took the time and the heart to start a gofundme page to raise money for a new wheelchair for James. People were generous and Torres worked with The Boston Orthopedic and Respiratory. James received his new chair plus the bonus of a new cup in which to store his earnings.  Here he is with his new chair and cup—and his thank you note in process. 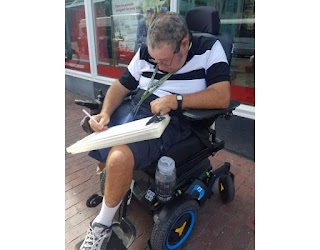 So much for envious projections of snootiness onto Harvard students. Call it Harvardism.

So much for assumptions about the general goodness and generosity of the public. Most people are kind.

So much for judging street beggary and putting everyone into the same nasty box called lazy, irresponsible, poor, or drunks.

So much for the idea that it is mostly religious or churched or Christian people who do their spiritual homework and follow Jesus’s only one commandment: Love. And doesn't love require paying attention and listening, both asking and receiving?

From what I have read about street people they appreciate money, but more importantly, they appreciate being noticed. I am not the only one who notices James. All this took place at the end of last summer. This summer so far I have missed James and pray with him. Please do the same if you will. Prayer is not a haughty holier-than-thou practice, nor is it magic or useless. It evokes hope in absence. It invokes God. Anyone can pray, and there probably is no one who has never prayed.

May Brian Doyle have the last word:
Let us pray that we are ever after dissolving the formal officious arrogant thing that wants to rise, and ever fomenting the contradictory revolutionary countercultural thing that could change life on this planet. It could, you know. Let’s try again today. And so:amen.
Posted by Lyn G. Brakeman at 1:40 PM 1 comment: