My son John is a librarian at an elementary school. He reads lots of kids' books and recommends them to me, telling me that his spirituality is always enhanced by the children’s books he reads.

The late great storyteller Madeleine L’Engle would agree. She has written many books, some of them on the shelves as children’s books. Madeleine said many times that there is no such thing as children’s literature. There is simply good literature.

Good literature includes picture books in which word and visual image come together to move the hearts of children and adults.

One such book is What Do You Do With An Idea? by Kobi Yamada, illustrated by Mae Besom. It’s a charming tale about a small boy who gets an idea. He loves his idea even though it feels strange as if it isn’t really his. He doesn’t want to share his idea for fear others will make fun of  it—and him. But his idea simply won’t die. It follows him around, hounds him you might say. In time he grows to love it, nourish it, embrace it as one might a great love, play with it, and follow it. Then you see what becomes of his idea—and you are transformed. 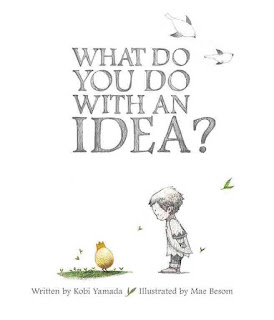 I’m someone who loves ideas, especially new ones, ones that almost force me to think differently, do things differently—change. My best ideas burrow under my skin—affix themselves. They challenge my assumptions and refresh me. I love ideas that fill me with laughing delight and won’t go away. I share them with people who want to try new things, to consider new ways of thinking and understanding. "Let’s" is my favorite word.

My very best beloved ideas I share with God—not to get an elevated opinion but to submit them to my inner spiritual barometer test. It measures my deepest feelings, ranging from enlivening to stifling. That’s how the Holy Spirit helps me discern whether an idea is godly, a little godly, devilish, or just plain me showing off.  There’s nothing fail-safe about this process but for me it’s how I pray.

For instance, I’ve assumed that a good sermon was generally, though not always, delivered by one person, an ordained person, skilled, trained and practiced at preaching from Holy Scriptures. Clergy, rightly, do try to live up to such expectations. It’s a vow! But is there more? Is this all that God expects for the holy Word in a sermon?

An idea churned inside me— not a totally new idea, but one I hadn’t revisited for a long time and one possibly new to my context. It used to be called dialogue sermon. Boring  title.

So with God’s help I tried it out and wrote about it on my blog post of 7/17/2016. The response was bright and exciting. I believe we gave the Holy Spirit a grand workout. Let’s try this again, God—when the time seems right and the text lends itself to it.

What do you do with an idea? Love it, test it, run with it, let it change you.