This photograph is called “Bentley’s Snowflake # 4 and is the 167th photographic print out of 200 of the same snowflake. Yes, it really is a snowflake pic, created way back in the late 1800s by the first known photographer of snowflakes, Wilson “Snowflake” Bentley of Jericho, VT. Here's #4. 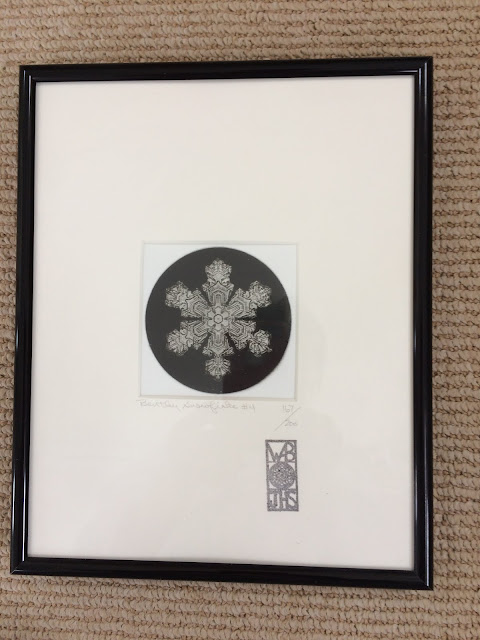 As a young teen Wilson Bentley was fascinated by snow crystals. Farm folk dreaded the winter but young Willie loved it and looked forward to it. He collected snow crystals and examined them under an old microscope his mom gave him when he was fifteen. Snowflakes were too complex to record before they melted so he attached a bellows camera to a compound microscope and, after lots of experimentation, he photographed his first snowflake on January15,1885.

Eventually, he perfected a process of catching flakes on black velvet in such a way that their images could be captured before they melted. Imagine!

Bentley described his little flakes as “tiny miracles of beauty” and “ice flowers.” He worked with George Henry Perkins, professor of natural history at the University of Vermont and published an article in which he argues that no two snow crystals are alike, just as no two individuals are alike. 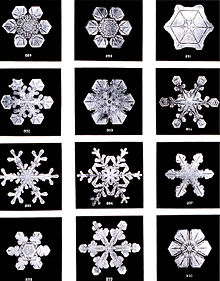 #4 has personal and historical meaning for me and my spouse Dick. It was a gift after we officiated at the marriage of Ellen Riddick and Brian Russo at a small Episcopal parish church in Jericho where a dear old friend, the Rev. Daniel Riddick, Ellen’s dad, was the rector. Jericho is also where Wilson Bentley’s farm was and where he did his best snowflake work.

Wilson Bentley died of pneumonia on December 23rd, 1931 after walking home in a beloved blizzard. His artistic work has made many people happy. Here he is with his camera and  microscope. He didn't die cold of heart. 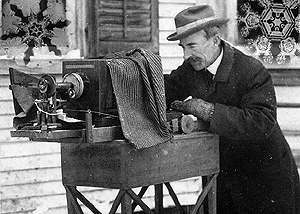 Bentley’s name is memorialized in the naming of a science center at Johnson State College in Johnson Vermont where John Brakeman went for a year in 1990. I remember staying on the phone with him when he was caught in a terrible blizzard driving his old car that had no snow tires. The college was atop a huge hill. John waited till he saw a large snow plow and slipped in behind it. He drove all the way up the hill safely following that big old plow.

You see lots of things in this life look impossible but might not be if you just stop, sit down, and shut up long enough to think. In the same way lots of things look exactly alike, especially when they’re all together in a heap like snow piles of flakes or hundreds of people in a stadium. But each flake is totally unique and absolutely special just as it is. So it is with people. Each person is totally unique and absolutely special just as they are—every one beloved, a tiny miracle of beauty.

Remember your own uniqueness as this little Snowflake #4 winks at you from wherever it hangs. May it bring you good luck and be a miracle of beauty to remind you you are never alone no matter how small you may feel. Let it be a blessing of Hope, Joy, and Christmas always.