Today is National Women's Equality Day, worthy of an extra post. Women and men of all faiths are invited to mark this day by joining a day-long social media campaign to draw attention to the marginalization of women in our faith communities and highlight the need for gender justice in religion—a non-issue in heaven but not yet on earth.

You can post your support on Facebook or through Twitter, using the hashtag,  #equalinfaith. If social media isn't your thing, just let friends know, as I am, in whatever way you can. Check out the Women's Ordination Conference site for ideas or just offer your own, in image or words.

People think of liberation mostly in political terms and images and that is wonderful, but there is a politics to religion that few of us acknowledge. St. Paul nailed (bad metaphor, sorry) it when, in a moment of exuberance, he said that in Christ, there is no male and female, slave or free, Jew or Gentile. Another man of faith got it, too. (May we let Christ represent all religious teachers, just for today.) 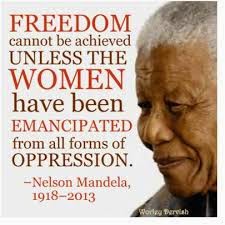 I regret that the voice of religion is so absent from public discourse, or so it seems to me. When I heard journalist, Gail Collins, read from and speak about her fine book, When Everything Changed. The Amazing Journey of American Women from the Sixties to the Present, I asked this question with care and caution: "I don't know if this is a purposeful omission, but I notice that there is nothing in your book about what was happening with women in religion, and there was a lot." Collins, after a pause, answered with graciousness that her research was secular.  "I should have interviewed you for my book," she said. I thought so, too.

There isn't a country in the world where women are treated equally—not one. I'm proud to be a religious professional and a feminist. Why? I found myself included and honored by the Bible (you gotta discern and sift through the texts,) by my Episcopal church, by many contemporary theological writings, especially those of Elizabeth Johnson, CSJ, by Mercy Sisters, by my children, and by my marriage partner and brother priest. I do not find myself well represented in the ongoing exclusively masculine language about the nature of God. But I know that I am honored because I am in I AM.


Equal In Faith is an interfaith movement, founded in 2013, by representatives of the Mormon, Roman Catholic and Missouri Synod Lutheran traditions. They believe that religious traditions can be transformed into more inclusive, equitable, and welcoming communities. Such transformation requires conversation. The founders proclaim: "We believe that religion can liberate rather than subjugate women." 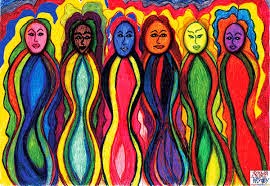