One of my mentors is Eve Ensler.  She is an American playwright, performer, feminist, and activist, known best for her play, "The Vagina Monologues.” I once had a starring role in that play. More humbly stated, I performed one of the monologues sitting atop a three-legged stool dressed in my clerical collar—and nothing else. Okay that’s a lie—fun, but a lie. I wore my professional uniform: black pants and shirt with a traditional stiff white band of plastic circling my neck. The collar, after which I’d lusted for some years, identified me as clergy, in my case an Episcopal priest. This collar gave me authority, authority it would take years for me to fully internalize, and even more years to relinquish so I could begin to rely on my own authority not the uniform’s. 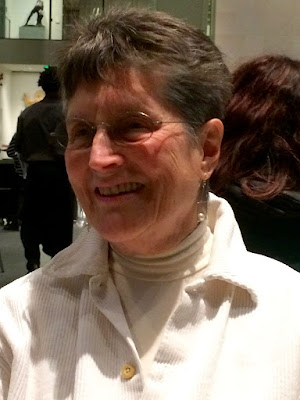 Ensler’s play premiered in 1996 and was hailed by Charles Isherwood of the New York Times as “probably the most important piece of political theater of the last decade.” Ensler’s mission was to campaign globally against anti-female violence. She offers the script free of charge to local groups every February 14th. Ensler as a young woman. 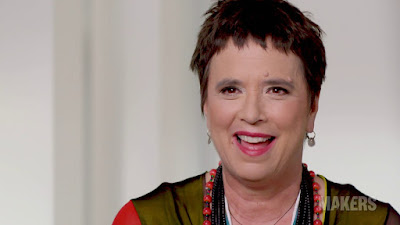 The Gloucester Coalition for the Prevention of Domestic Abuse, of which I was a member ,got the script in 2006 and put out a call for auditions. My heart leaped and I signed my vagina up for an audition. We got in. There were no official costumes, so I decided, with some trepidation, to wear my collar for the performance.

I spoke the part of a mature woman who had attended a vagina workshop. Honestly, there really were such things. They were designed to help woman connect, or reconnect, with their sexuality, specifically to get to know their “privates". No kidding, women lay on mats and pretended to have a relationship with their vaginas while a young twenty-something guided them along. All I had to do in my monologue was portray my vagina’s release from hidden shame to wondrous self-affirmation while sitting on a stool, wearing my clerical collar, and faking an orgasm on stage. I got a standing “o”—that’s ovation.

There were some older women from my parish in the front row. They looked stern I thought, but I saw one of them suddenly cover a giggle. They never said a word, a grace for which I adored them. But two young women joined the parish after they saw me in the play, and another friend in my yoga class told me her 80 year old mother had whispered to her: “Can we go to that church?” Well, there’s more than one way to evangelize. Call it V-evangelism.

Eve Ensler is sixty-six now and continues to write about big topics like God, death, and women. I write about the same topics. Her experience of being systematically beaten to bleeding by her father throughout her childhood was more traumatic, although comparisons are odious, than my experience of being sexually molested in a NYC movie theater when I was eight by an old man with a long white beard who looked just as I thought God would. I called him the old God-man.

I buried my own trauma in an abyss of shame—sure something was wrong with me that this happened.  It was not until I was in seminary seeking God, a way out of shame, and the fullness of my own sexuality, that I wrote about what happened to me in a journaling course that encouraged experiential theology. I’d thought just knowing what happened was enough, but knowledge was only the melody. When supported by the tones of my feelings and bodily sensations, the truth grew robust—and holy. I knew I had written the old “God-man” to death—myself and my body to new life. Perhaps this was my own vagina monologue.

Like Ensler, I found healing through writing, as well as through performing in her play.

Ensler has just published a second memoir called Apology in which she exhumes her father through her imagination and writes the apology she wished she’d had from him. She ends her book with: “Old man be gone.” I now that feeling. Old God-man be gone!  AMEN.

I wear my collar now when I’m officiating at a religious rite and when I feel proud of something I’ve done with God’s help, such as writing books in which the Holy Spirit takes the lead. 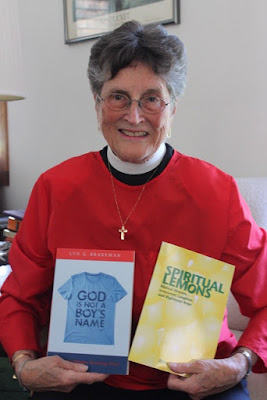 In the 5/26/19 NY Times Book Review Ensler quotes from her favorite book: "Letter to a Child Never Born," by Oriana Fallaci: "And yet, or just for this reason, it's so fascinating to be a woman. It's an adventure that takes such courage, a challenge that's never boring. You'll have so many things to engage you if you're born a woman. To begin with, you'll have to struggle to maintain what might even be an old woman with white hair or a beautiful girl. Then you'll have to struggle to explain that it wasn't sin that was born on the day when Eve picked an apple, what was born that day was a splendid virtue called disobedience.”

It remains a challenge for us women to find our voices, our bodies, and our dignity in this rootedly patriarchal world, still doggedly resistant to sharing power. But we are present. We speak. We write. We keep on disobeying the rules set for us by forces over which we had no control. We will simply BE. What grace there is in that simple declaration of Being itself—just as we are. Thanks be for the first woman Eve and for all her spiritual namesakes, like me and Ensler, and so many others.
Posted by Lyn G. Brakeman at 2:17 PM 4 comments: