Most Christians are familiar with the Garden of Eden myth in the Bible. Likewise, most Christians cast aspersions on the snake, or Eve, or the fatal forbidden apple itself. You’d think Eve was Snow White plucking and eating a fatal apple out of which popped the head of an asp.
Incidentally, the Bible calls the fruit of the tree a “fruit” not an apple. Still, the apple won the day as the fruit of choice for delight and trouble, and snakes still scare the bejeezus out of many women. Ah the stereotypes we create! 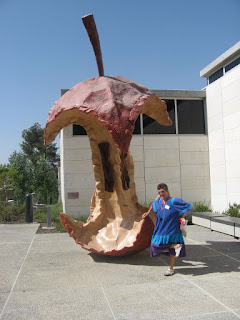 This apple core stands today outside the Jewish Museum in Jerusalem. I loved posing with it.

Dick and I listen to the Festival of Lessons and Carols every Christmas Eve morning. It’s broadcast live on radio from Cambridge England. This year was its 100th anniversary. It is, oh, so traditional, and oh, so beautiful. This year for the first time I noticed something amazing about that old apple. One of the 15th century carols sings of Adam “ybounden”—tied in knots you might say, and all for the sake of an apple he took. The carol goes on to say, however, that had the apple not been taken, our lady would never have been a heavenly queen. And so we sing:

Blessed be the time
that apple taken was,
Therefore we moun singen  (may sing)
Deo Gratias

Interpretations abound of course, but this medieval one caught me up as I realized how valuable the old apple turned out to be for Christians. I now see the supposed curse of Eden in a new light, call it Eve and Adam claiming their place in the salvation scheme, taking the first bite into the Incarnation, that spiritual action by which things divine are joined with things human—and all thanks to an “apple” from the Christ-tree.

There’s even a medieval English carol singing praises to both apple and tree.

1. The tree of life my soul hath seen,
Laden with fruit and always green:
The trees of nature fruitless be
Compared with Christ the apple tree.

2. His beauty doth all things excel:
By faith I know, but ne'er can tell
The glory which I now can see
In Jesus Christ the apple tree.

3. For happiness I long have sought,
And pleasure dearly I have bought:
I missed of all; but now I see
'Tis found in Christ the apple tree.

4. I'm weary with my former toil,
Here I will sit and rest awhile:
Under the shadow I will be,
Of Jesus Christ the apple tree.

5. This fruit doth make my soul to thrive,
It keeps my dying faith alive;
Which makes my soul in haste to be
With Jesus Christ the apple tree. 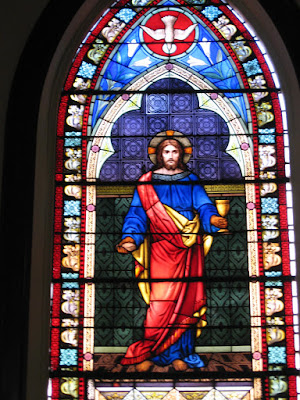 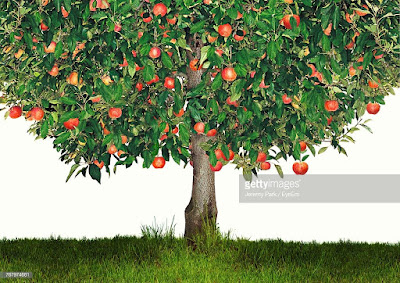 The apple ne'er does fall far from the tree.