Who knows? I try, anyway.

It’s an early Christian stunt, not to divide Divinity up into equal parts like ancient Gaul, but to describe distinct spiritual experiences of the one living God, important enough to name each separately yet to assert that each never exists apart from the whole. The whole is greater than the sum of its parts. God is both. Godde as dynamism creates all life, ignites all life, and connects all life—all the time, all three. Trinity is the Christian name for God. Here is a lorica, a Celtic symbol associated with St. Patrick and the hymn we sing to the Trinity. 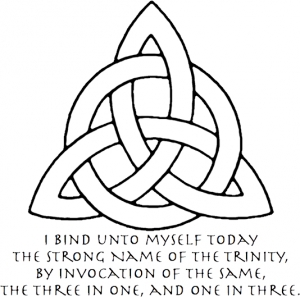 A lorica was a breastplate, armor that covered the chest. Today we might call this a bulletproof vest. Biblically, it is symbolic of the armor of Christ, an internalized protection against temptations to succumb to maleficence. (Ephesian 6:11) Here it is, according to Augustine of Hippo.

The small group who knew Jesus well didn’t come up with doctrines immediately after Jesus died. They had no ritualized funeral, no rich collation. I bet they did what we do: sat around and talked about the one who had died, shared memories, cried and laughed. Time passed. Like us, they didn’t forget. You don’t when you really love someone.

Eventually, I guess someone came up with a strange idea:  What if Jesus the Christ was divinely human? After a silence, they all chimed in at once.

Are you kidding? There’s only one God.
Yes, but . . .
Crazy heretic!
Well, he was kinda special, healing and all. A mensh (Yiddish: person of integrity and honor.)
Who asked you, woman?
All his oddball teaching, too. Oi vey!
The authorities killed him for that, so shut up already.
Holy maybe, but not divine, not God.
I’m going home. Come on. Why are you all sitting there like stones? We’re all meshugga. (Hebrew for idiotic, nuts.)
Or, it’s a miracle.
Sheesh!
Wait. Listen. If Jesus was divinely human then so, just by being human, are all of us.

They sat motionless. If Jesus was a divine human, then so are we?

With a staggering degree of imperfect simultaneity, this tiny band breathed: O, my God.
(This is what you say when you recognize God in something.)


Still, who, in fact, would sign on to such an idea? Some did. Some ran like hell. It’s the same now.


Yet these beginners kept breathing their idea. The news spread, as all good gossip must, spirit-motioned or not. We could say that’s how the Trinity got going and took off.

OR, we could stay with St. Augustine who later identified this idea as something they’d always intuited: God is simultaneously Lover, Beloved, and Love itself.

OR, we could ask the beasts. Remember Moley from The Wind in the Willows? Here's a Trinity/God story.


Mole and his best buddy Rat cruised the river in a small boat on an errand of true mercy. Their good friend Otter, despite strenuous efforts, was unable to find his lost baby son, Portly. Despair possessed Otter’s heart. Rat and Mole instructed their friend to sit on the river bank and wait. The two entered treacherous waters pulled along by the sounds of piping. Rat was transported by “this new divine thing that caught up his helpless soul and swung and dandled it, a powerless but happy infant in a strong sustaining grasp.” 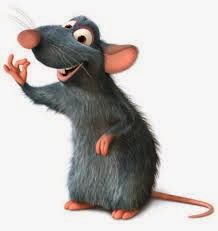 Mole, more empirical than Rat, heard nothing and rowed on, Rat all the while exuding rapture. Then Mole heard and was transfixed. Soon “the clear imperious summons that marched hand-in-hand with the intoxicating melody imposed its will on Mole, and mechanically he bent to his oars again.” They moored at a small island patch. “Then suddenly Mole felt a great Awe fall upon him, an awe that turned his muscles to water, bowed his head, and rooted his feet to the ground. It was no panic terror—indeed he felt wonderfully at peace and happy—but it was an awe that smote and held him and, without seeing, he knew it could only mean that some august Presence was very, very near.” Mole is smitten.

In summary, the two followed the music and met a demi-god piping a panegyrical lullaby. Nestled asleep between the hooves was the round pudgy little baby otter. They awakened him and returned him to Otter who had waited “in dumb patience.” (Now ain't that a truth?) Otter gave a joyous bark and ran to embrace his tiny “prodigal” son.

The rescuers struggled to understand what happened, exactly. The Vision had vanished, the music replaced by bird songs. “For this is the last best gift that the kindly demi-god is careful to bestow on those to whom he has revealed himself in their helping: the gift of forgetfulness.”

But what does this mean?”asked the exhausted little mole. Silence. His friend, the weary Rat, was fast asleep.

The grace of Jesus Christ, the love of Godde, and the communion of the Holy Spirit be with you, each and all, all ways. Amen.