My dad would be 103 today. I think of him a lot. He was a taciturn guy, drop-dead handsome, as they say, quiet to excess, unless he held a martini in hand—or when he died. Dying, he made lots of noise.

Phrases in Christian hymns, chants and prayers, and sermons, especially during the run-up to Easter, say things like, “They did not know what we know now,” or “We know how this story ends.” Do we?

Such self-assured smug Christianity does not appeal to me at all. I don’t trust it, which probably makes me a good Anglican.

Is there a soul among us who embraces our death with sanguinity? Unless bio-life is simply not bearable, most of us really want to live and fight hard for that chance to live on. We do NOT know what will happen after we die, in the way we think of knowing. Faith knowing is a risk, not an assurance. I'll get honest and admit I'm a faithful agnostic when it comes to end times. I don't know, any more than the first Christians did.

A woman in a Lenten reflection group last year commented with a chuckle: “I hope to hell that what they’re telling us is true.” Hers seemed to be a more truthful statement than many Christians would dare make about the promise of resurrection. There was an edge of worry in her humor and our laughter.

What’s important, I think, is not to try to push and shove some kind of faith into place, like last-minute soul-shaping, just in case. Some say that faith-knowing is a gift only God Holy Spirit gives, and that it is given in the context of knowing each soul quite well. Sounds good, but how come some people seem to have it, and some don't? It does come more easily to some than to others. I don't know why.

Still, the time of dying is a time when people often worry about having enough faith. For what? Most people die with the personalities they lived with.

My dad wrestled his “demons” to the pillow, accompanied by the chiming of the grandfather clock. He was not in physical pain; he was groaning in travail as if he were waiting to be birthed—like creation. At one point he came briefly out of his dying and boldly asked me: "What's the point?"  It was something he often said, almost rhetorically abut many things. I panicked. I thought that I, as a hot-shot seminarian— at Yale (Dad's alma mater) no less— ought to have the right theological answer, the soothing one. I didn't. So I just said, "I don't know, Dad. But when you find out, if you can, find a way to let me know." God, I felt inadequate. I should have said I love you or something personal, but the moment vanished as he sunk back into his dying.

My mother, au contraire, ordered a peanut butter sandwich as her last meal, and told her granddaughter: “This won’t take long, dear.”  She was 84, a widow, living in a nursing home; she had some kind of internal bleed and had refused hospitalization. Then she, not in physical pain, turned aside, and onto her side—away from the door to her room, the door to the world—and settled into her dying without a fuss, leaving the sandwich untouched.

Do I think my mother had more faith than me or my dad? Perhaps at a very childish level, yes. She always told me she would put her head in God’s lap, and everything would be all right. (I think she meant her own father’s lap. He died when she was twelve.)

Do I think my dad lacked faith? Not at all. He had esophageal cancer and couldn't eat or drink anything by mouth. He was only 71 and could have lived that way, waiting for medical science to come up with something, but I think he made a choice to die. It took a week. He had things to settle his soul about, and he didn’t talk about these things in death any more than he ever had in life. It is by faith that I "know" he has discovered "the point."

My own feeling is that when we come to our death there comes a time of almost uncanny repose. I saw that a lot when I was a hospital chaplain. I don’t know if it is acceptance, although that word works, but it looked and sounded to me like embracing death almost as a friend or setting one's face in a new direction, as Jesus did toward Jerusalem. Or, like Jesus’ remembered sighs on the cross: It is finished. I commend my spirit. To what? To faith, hope and love, but not to certainty. To God, the giver of those seminal spiritual gifts.

Dying is our last life task/accomplishment. We do it with as much grace and faith as we can muster, each according to each one’s way. It is like commendation, not forced or giving up, but free: I will follow; it's time; I'm ready. But after death is God’s business and god keeps it to Herself. Some have returned to tell beautiful stories. They help my faith, not my knowledge. Like a kid for Christmas morning, I will have to wait and see.

Saint Francis called Death a Sister— a term of endearment, not enmity. I wonder if that is why many people die when their anxious grieving loved ones are gone from their bedside, and only a solo chaplain-stranger may stay on in the dark?

Such a strategic attitude and language, I think, would be more helpful to the ways we talk about life-threatening illness, physical and mental. We threaten it back, saying we will battle you, we will fight you, we will reject you, win over you. You are enemy and hateful. We make illness and death sound like condemnation or punishment. What if we, like addicts, befriended disease as a part of our humanity? They speak of being IN recovery, not cured. They will always be addicts.

We must seek treatment and cures, of course, and, at the same time, pray and have faith and courage. Fight FOR life, but don't make whatever we have into our enemy.

I suppose I could say that I hope my death is transition to a new kind of life. I am always IN God, just as I'm always IN recovery from sin, into some form of which I daily fall. But after I die, leave for good, I hope to fall into the soul of Godde more deeply—leave for good, to newer be.

The poet says it best: "we turn not older with years
but newer everyday." 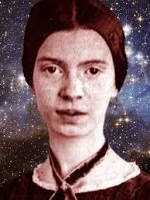 Thanks, Emily. And Happy Birthday, Dad.