Dick and I just saw the film, “The Battle of the Sexes” about the 1973 tennis match between Billie Jean King, 29, played by Emma Stone, and Bobbie Riggs, 55, played by Steve Carell. Besides good tennis, the film captured the essence of male/female issues back then—and sadly unresolved today.  Here are Stone and Carell facing off. These actors look amazingly like King and Riggs.

We sat alone—one woman and one man in the darkened theater munching our popcorn—the only two people breathing except the onscreen actors. I was rapt, thrilled. I loved and played tennis—with enough zeal once to cheat: my racket ticked the net which was illegal, and I didn’t tell, a sin of shame worthy of much confession later, but right then, I was too exhausted not to win that match.

Watching the film, I relived both my old tennis joy and my excitement about the 1970s feminist explosion. In 1973 I too was dreaming of changing the world, or at least the church. Priests were white, male, and in charge of altars and pulpits. Women were in charge of the kitchen and the sacristy.

When Billie Jean King was twelve she had an epiphany: everything in tennis was white—socks, clothes, balls, and players. For King this meant that if she were good enough at her sport she could help change the world, not just her sport. She did both, playing with all her strength to win against a single opponent—and against sexism, racism, ableism, and heterosexism.

Epiphanies open our eyes and hearts and catapult us beyond our narrow little worlds.

When I was twelve I too had an epiphany: my new suburban public junior high school was overrun with boys who seemed to multiply on demand—loud teasing, testing their testosterone  prowess. I’d come from an all-girls’ school and I suddenly felt pathologically shy, short, dumb, boobless, and female. School had been my “sport,” but I couldn’t get good enough at it to change the world, because school had become a boy’s kingdom. Soon I switched “sports” to play for God’s putative kingdom, the earthly version of which was also a “boy’s” kingdom. I thought, nevertheless, that I had a better chance of changing that kingdom because of its divine imprimatur, not to mention the biblical idea that God created everyone in God’s own image, not just boys.

My grim epiphany in school and church wasn’t far from what King ran into as an adult. She excelled in her sport and tried to change the tennis world—a kingdom for men. Women played in their own tournaments, but they were not paid as much as men in money or recognition.  So King and other women started a “league of their own” lobbying for equal pay for equal work on the courts. King and her women arranged boycotts, hired a fashion designer to create their own tennis outfits, promoted their cause, and made a public scene. King lost her membership in the professional lawn tennis association, and earned the scorn not only of  her male counterparts— players, managers and commentators—but of a whole patriarchal world. She also gained the respect of many women in waiting. She modeled fierce determination.

The publicity awakened the ego of tennis champion Bobbie Riggs, retired from tennis but not from his ego needs or his gambling addiction. Riggs, filled with delusional grandiosity, taunted King and challenged her to a three set match with outrageously high stakes. 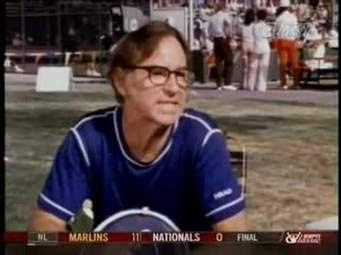 Philip Morris paid big bucks to sponsor a tour for the non-smoking women and their cause—a touch of risky irony.

The emotional drama this film portrays is what happened inside these two flawed and gifted individuals, battered by unjust American societal expectations imposed from without on both sexes—both.

The grace of this movie is that it has the courage to portray the truth in good taste. Both players were transformed—not by winning or losing one match—but by inner courage for King and inner humility for Riggs. 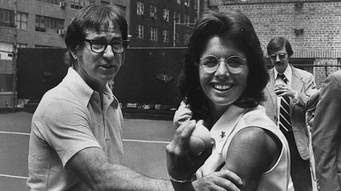 Today, King, now in her early 70s, in an interview in the N.Y. Times Sunday Magazine, 9/17/17, said that she believes that a lot of advances have been made in social acceptance of the GLBT community. “We still have a long way to go, and I think we’re starting to go backward a bit, especially with the ban on trans people in the armed forces. We have to keep pushing. We have to have equality in every way. Everyone deserves to belong.”

That is what she did for tennis, for me, and I’d say for the earthly kingdom of God as well—maybe even the heavenly one too.  She still wears her signature glasses. She is a champion of justice for all of us in bright red, pink, or blue glasses. 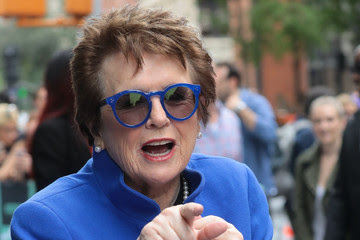