The Advent season is paradoxical. It’s full of darkness and ominous warnings about endings—of the world, of human lives, of our whole planet in peril. Simultaneously, Advent also offers stunningly compelling images of light—the light of a single matchstick struck to brighten a small space, the light of a single candle passed around to light other candles, the pierce of a single note or voice, calling now and over time for people to look and see and expect.

Such Advent chiaroscuro is just enough to hold a community at worship, or at war, in thrilled suspension for mere seconds. That’s when you hold your breath and breathe. That’s when you murmur, Oh my God, and you don’t know why, but you think it might be prayer.

Once upon a time, a little boy loved a stuffed animal whose name was Old Rabbit. It was so old, in fact, that it was really an unstuffed animal; so old that even back then, with the little boy's brain still nice and fresh, he had no memory of it as "Young Rabbit," or even "Rabbit"; so old that Old Rabbit was barely a rabbit at all but rather a greasy hunk of skin without eyes and ears, with a single red stitch where its tongue used to be. The little boy didn't know why he loved Old Rabbit; he just did, and the night he threw it out the car window was the night he learned how to pray. He would grow up to become a great prayer, this little boy, but only intermittently, only fitfully, praying only when fear and desperation drove him to it, and the night he threw Old Rabbit into the darkness was the night that set the pattern, the night that taught him how. He prayed for Old Rabbit's safe return, and when, hours later, his mother and father came home with the filthy, precious strip of rabbity roadkill, he learned not only that prayers are sometimes answered but also the kind of severe effort they entail, the kind of endless frantic summoning. And so when he threw Old Rabbit out the car window the next time, it was gone for good.

So begins the article “Can You Say  . . . Hero?” by Tom Junod, originally published in the November, 1998 issue of Esquire Magazine.  The current popular movie, “It’s a Beautiful Day in the Neighborhood,” is the story of Mr. Rogers and Tom Junod and Old Rabbit—and a lot more. Junod is a writer who was assigned to interview Fred Rogers, hero of children’s television and originator of the show for young children: “Mr. Rogers' Neighborhood.”

The most wonderful thing about the late Fred Rogers and his show was not its popularity, but the fact that so far no one—no one—has been able to prove that Mr. Rogers was not really, in true life that is, as nice as the person he created for his show, a person who welcomed everyone equally with a smile into his make-believe neighborhood, who spent time listening to each child no matter how off schedule the filming of his show got, and who consistently embodied his message: “I like you just the way you are.”  Oh my God!

It was all an act of course, wasn’t it?

Tom Junod was grumpy about being assigned the task of interviewing Mr. Rogers for a series on heroes. Junod was cynical, skeptical, and irritated. He wanted some “hot shot hero” to interview, someone who was a REAL hero, not a schmaltzy kiddie show host. And on top of all that the editor of Esquire only gave him 400 words. Reluctantly, Junod did his job. He hung out at the edges of the make-believe neighborhood to meet this make-believe man, this silly non-hero. He hovered in the darkened gloom of the studio and watched, scribbling notes on and off. He intended to create something passably publishable and do it with haste. Gradually, Junod edged from the darkness into the light of Rogers’s soft voice and the paradoxical truth of actually being liked just as he was—mile-high shoulder chip and all. Here is Junod with Mr. Rogers. 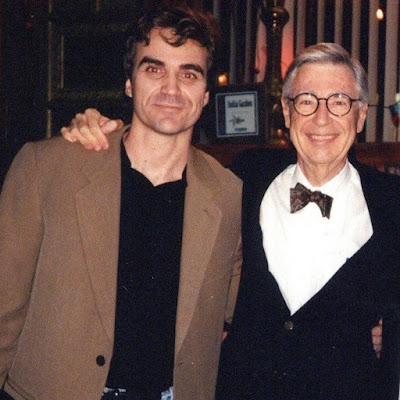 No, Tom Junod did not learn to pray, although that was something Mr. Rogers did regularly, and in one scene Rogers, played by Tom Hanks, called the entire theater audience into a silence—just a short moment. We all became a prayer—all at once one, not a sound. No, Junod did not have a religious conversion or suddenly proclaim the glory of God.  No, he did not say Oh my God out loud. And no, he did not write a paean to a lost beloved rabbit—not really.

Such a mixed-up experience is a bit like Advent. We move slowly and uncertainly to let in a little bit of light and hope at a time, just inches at a time. We do not magically transform our darkness of mood or circumstance into light. Nor do we change our personality any more than Junod did, but we do begin to live allowing light and dark to meet each other, to co-exist, neither one compromising the other.

You could say this is what being really nice and really real is all about. Oh my God.
Posted by Lyn G. Brakeman at 2:44 PM 2 comments: