This is Victor RCA. He will always be a hero dog in our family. Victor saved the life of John Brakeman who in turn had saved Victor’s life. Victor died just before Christmas, 2016, at seventeen. 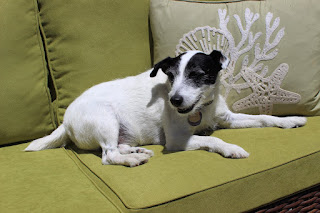 Victor, a white Jack Russell with black patches over both eyes, a charmingly cocked-head pose, and a big barking mouth came into John’s life at the suggestion of his sister Jill the family animal lover. Victor was only a year old and living in a situation which was “plain no good.” He needed a loving home and good care.

John, just 30, was then living in a rented apartment, working as a teacher of fifth grade, and in the midst of managing a life-threatening medical situation that would end up requiring six surgeries, months of recovery, a frightening stint in the ICU, and all the grit John could muster. It was hardly the time to take on the responsibility of a pup, let alone one as noisy and needy as Victor. But the two fell in love instantly, and John took the dog into his home and named him Victor RCA.

During John’s hardest most painful times Victor was a constant companion, eagerly present to greet John when he came home and swift to cuddle up, lending his warmth and affection to John's every day and night. Victor loved to ride with John in the car often licking John’s neck and face from his perch between the front seats. And Victor would respond to John’s commands to, basically, shut up. He knew his master’s voice.

One of the “tests” of a good marriage partner for John was: could she manage to love Victor as well as John? Emily Hotchkiss Brakeman and Victor bonded quickly. The couple married and soon Victor occupied the space between them in bed. He was a dog who managed to worm and weasel his way into everything— even the love space.

Once Victor, who behaved most of the time as if he’d never been fed, managed to hop onto a counter and retrieve a box of chocolates, which he consumed with relish and then walked with his chocolate-covered paws all over a new beige sofa. Chocolate is supposedly toxic for dogs. Not so for Victor whose intestinal system was ironclad.

Victor got along with the more aloof standoffish cat and together they did food tricks. The cat cold execute the the far reaches of kitchen counters from which she would use her paws to bat food down off the counter to the eager Victor. 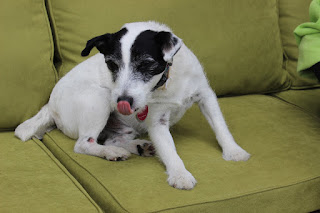 The family expanded to include a daughter Phoebe, now eight, and a son Dylan, two-and-a-half. Victor licked both children into the family with doggy kisses. John had been fearful that Victor might feel jealous, but not our Victor. His favorite perch soon became the infant seat. 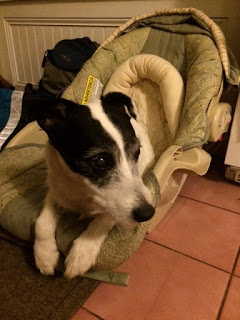 Victor with Phoebe when she was his height. 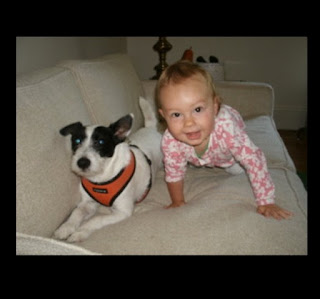 Grampy Sim adored Victor. The attraction was mutual, including of course forbidden treats when possible.  Once on a visit we were going out and left Victor alone to guard the house. Believe me his incessant bark would scare off any break-in artist before he or she got in. We, however, had a new alarm system. It was as hypersensitive and hypervigilant  as Victor RCA. We set the new alarm and were walking to catch the red line subway for a day in Boston when the police called. Our alarm had sounded its harsh repetitive warning. John and I were puzzled, but Grampy Sim knew immediately what had happened. Victor was moving about, seeking the best bed after he’d given up hope that the door would open to reveal John, and set off the alarm which is movement-sensitive for the ground floor. Grampy sped home to rescue poor little Victor who was not only hoarse but aquiver with terror. It didn’t take long to silence the alarm but it took some time to quiet Victor. The two went for a leashed walk to the park and spent a man/dog day together. 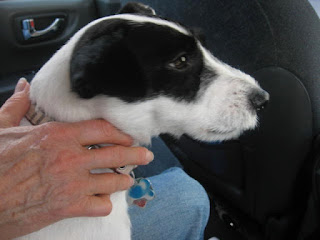 The decision to put Victor down was heart-breaking. Compassion often is. Victor was not only quite old but had a condition that made it increasingly difficult to breath well. Veterinary care had been exhausted. John sent this text on December 21st to the whole family: “He was truly struggling. Last night we were scared for his life. I could almost tell by the way he was looking at me that he was saying, 'It’s time.' Em and I had to make the difficult decision to put him to sleep. It was the hardest thing I have even done because I love him so much. I’m hanging in there but am a wreck. Say a prayer for him. He will miss all of you.”

Victor’s death was sad and peaceful.  John held him and told me later amidst sobs: “I felt his little heart slow down and slow down and then it stopped and he was gone. He’ll never be back.”

Thank you for your life Victor RCA. In the spring we will have a proper burial with shared memories, blessings and prayers as we bury your ashes. Right now they are in a special container with your name and dates on it— and your paw print. You will never be forgotten, beloved dog.

P.S. Let no one in my presence dare say that there is no resurrection for animals—not just pets!!
Posted by Lyn G. Brakeman at 2:05 PM 3 comments: