I have a very old photo of me and my mother. I'm about four and she's in her early thirties. She is perky and pretty and I am sour and serious. She called me a sourpuss and I was. She had proclaimed me a "miracle." I hated being a miracle.


But Mom also gave me a book, published in 1934, called The Little Book About God. The book shaped me in ways I didn't understand. When I was near fifty Mom gave me a framed quote in multicolored calligraphy: "God danced the day you were born." On the sides are smaller inscriptions: “You are loved, you are beautiful, you are gift of God, His own possession.” And: “You are gift to all mankind, His gift of love to them you are His.” She had ordered it from an Abbey Press catalog. 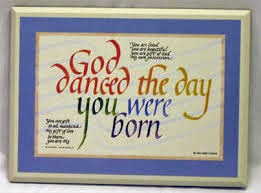 Mom has been dead now for 17years, and I can only guess at her motives. What I can say is that such praise was for me unbearable, not to mention quite untrue. Not until after she died and I started to become a woman and a priest, did I retrieve the fullness of myself and know that my mother had given me God. I still have The Little Book About God and the calligraphy. 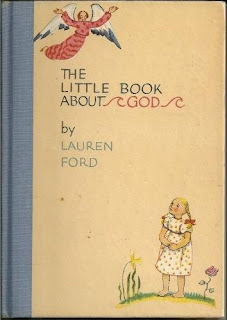 Still, with my penchant for words, I have to include another less personal proclamation in original words written in 1870 by Julia Ward Howe. Howe was an abolitionist. She wrote the “Battle Hymn of the Republic” and worked to establish a Mother’s Peace Day.  In 1907 Anna Jarvis of Philadelphia campaigned to have the day recognized as a national holiday, which was accomplished in 1914 by President Woodrow Wilson. This proclamation is still shaping the world and humanity.

The Original Mother’s Day Proclamation: Appeal to Womanhood Throughout the World

Arise, all women who have hearts, whether your baptism be that of water or of tears! Say firmly: “We will not have great questions decided by irrelevant agencies, our husbands shall not come to us, reeking with carnage, for caresses and applause.

Our sons shall not be taken from us to unlearn all that we have been able to teach them of charity, mercy and patience. We women of one country will be too tender of those of another country to allow our sons to be trained to injure theirs.

From the bosom of the devastated earth a voice goes up with our own. It says, “Disarm, disarm! The sword is not the balance of justice.” Blood does not wipe out dishonor nor violence indicate possession.

As men have often forsaken the plow and the anvil at the summons of war, let women now leave all that may be left of home for a great and earnest day of counsel. Let them meet first, as women, to bewail and commemorate the dead. Let them then solemnly take counsel with each other as to the means whereby the great human family can live in peace, each learning after his own time, the sacred impress, not of Caesar, but of God.

In the name of womanhood and of humanity, I earnestly ask that a general congress of women without limit of nationality may be appointed and held at some place deemed most convenient and at the earliest period consistent with its objects, to promote the alliance of the different nationalities, the amicable settlement of international questions, the great and general interests of peace.

If Mom were still alive, she might say, “Well, darling, I told you so—in my fashion of course.”