There’s this brief but potent little tale tucked into a series of parables about faithfulness and healing in Luke’s gospel. I’ve always loved this story, nicknamed “The Importunate Widow.” (Luke 18:1-8)

I love the word importunate. It’s a word that demands attention—so startling in fact that later translations of the story substitute the lamer word: “persistent.” But who ever looks up importunate?  It means persistent to the point of annoyance or intrusion, and comes from Latin importunus (inconvenient) and the god named Portunus who protected harbors or ports—protected. Importunity connects to opportune, coming at just the right time, or perhaps the nick of time.  Which time is it for this woman, the right time or the worst time?

The parable is about a woman, a widow and therefore on her own and vulnerable, who raises nagging to an art form for good reason. She will not be put off or sent away by the judge to whom she repeatedly appeals for justice against her opponent. One could assume she’s demanding a retrial without an attorney. Finally the judge, sick of her importunity, grants her request—not because he is just, but because the woman is a nuisance, an annoyance, in the manner of a mosquito whining in your ear at night causing you to slap your own ear to get the thing to shut up. 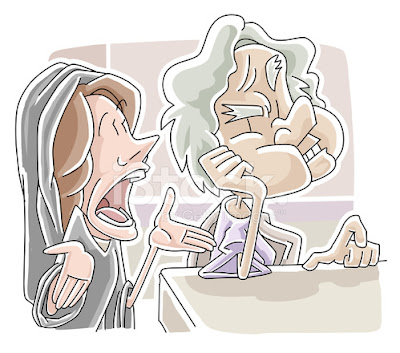 Is this a story about faithfulness? Or is it a story about justice won? Or is it a “MeToo” story? I vote for #3 and note history: women have felt importunate for centuries, but have been silenced, publicly and behind closed doors—even unto death—
- by strong cultural norms dictating how women should behave,
- by women themselves out of fear,
-by women who have silenced daughters and sons, passing on the silencer tradition.

When my oldest daughter, Bev, was about five she was unjustly punished, and I failed to stand up for her. My spouse/her dad was not a violent man, nor was there overt domestic abuse in our home. This is one small importunate incident. We had weekend guests who were preparing to leave on Sunday morning. They came down the stairs with their suitcases. As we were bidding them farewell, my daughter spotted one end of a toothpaste tube sticking out of Mr. X’s suitcase. It was funny. She pointed and laughed. Her dad became furious, yelled at her, and sent her upstairs to her room. My heart ached for her, yet I said not a thing. Hardly importunate of me. It was a petit mal trauma, the kind that leaves scars on a soul. You see what I mean.

What is remarkable—and truly importunate—is that this story appears in a tome as ancient as the Bible and is called holy. Jesus, as interpreted by Luke, introduces this story as a story about the need to pray and never lose faith. This is a classic case of someone’s, in this case Luke, putting words into Jesus’s mouth— interpretative words. It happens, you know.

The story purports to be about prayer and faithfulness in prayer to God. BUT……..

Faith is too weak a word for the untimely importunity this woman exhibits. Stubborn trust in her own experience and need is more accurate. We know nothing about her circumstances, except that she’s a widow and has an “opponent.” She “continually comes” at the judge, who is corrupt and NOT anyone to pray to. He grants her justice—“so that she may not finally come and slap me in the face”. The idea of course is that God will grant justice more swiftly and fairly than this unjust judge on earth. But where does that leave the woman? Flip the parable.

I see God incarnate in the woman. I see the God who plunders the depths of God’s own desire for justice, a God who never gives up, a God who is the nag, and the beggar, and the abandoned infant, a God who is importunate in empowering human agency with wails in the night and pounding fists on our souls. Can we hear such a God in our midst?  [Oh, this may seem like very undignified behavior for God, but I assure you, it is not at all above the behavioral repertoire of Ms. Holy Spirit to inspire such importunity.]

Jesus, as interpreted by Luke, seducer of Gentiles into Jesus’s flock, plummets headlong into the fray with the widow and judge, taking us with him. Then adeptly he steps back from the action to deliver a challenging and final crowd-stopper:

“And yet when the Son of Man comes, will he find faith on earth?” 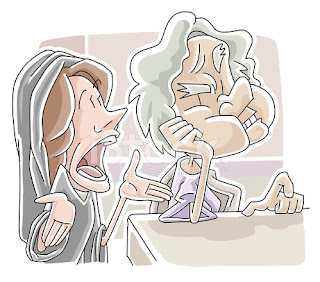