A friend recently asked, “What’s an apostle? We say in the Creed, we believe in 'one, holy and apostolic church.'" He hastened to tell me he understood “one” and “holy” but wondered what apostles were, then added that he didn’t like saying what he didn’t believe in or understand.

I thought, “Well, join the group", but that was quick sarcasm. Still, I wanted a better answer, so I said, with equal haste: “The early followers of Jesus who preached the gospel all over their little world and, thanks to them, it took hold. Apostles."

That was an blah response really. But something else, equally icky but with more pizazz, occurred to me, so I added. “Apostles were first responders.” We laughed.

Tomorrow is the day we remember the Confession of St. Paul, known as “apostle”—a man accosted by the holy presence of the Risen Christ, a blinding light—glaring enough for him to realize that the one everyone else was calling the Christ was asking him, a non-believer to say the least, to preach the good news of resurrection. Paul didn’t turn into an apostle overnight. He didn’t run off immediately to take on this assignment. His conversion to the ways of Jesus Christ was not magic or easy. Paul spent much time, as the legend goes, in literal blindness, wondering and questioning, and coming to the truth of who he was—really, truly, deeply. All this before he went forth to do the work of an apostle, to become a Christian missionary. 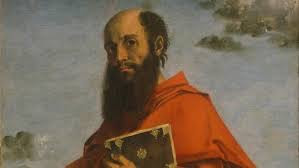 This story is biblically dramatic, but do not we all go through such times when something intersects our lives and we see ourselves anew, perhaps taking new directions?

It’s nearly impossible to describe such soul-collisions, such conversionary experiences. Poetry does it best, or maybe a wise insight of a reverent mind, a bit of amateur prosody, or even a throw-off but passionate line in a TV series. Whatever it is you are, for a second, blinded.

I have heard, in that fierce embrace, even
the gods speak of God.

-- David Whyte
from Fire in the Earth
©1992 Many Rivers Press

Who Told Me Who I Am?

I was a miracle,
a gift from God.
My mother told me so.
But I demurred
and tripped on all her haloes.
No, not my status, Mom.
But gift from God?—
showed promise.
I looked above and then below
and finally looked within where
Lo! Behold!
I quickly saw that a present
was really a Presence.
Lyn G. Brakeman, 2016


“Healing is an art. Every person is our Sistine chapel.” (A nurse’s line in the television series, “Mercy Street” )
Posted by Lyn G. Brakeman at 2:48 PM 1 comment: