In Advent we hear a cry of warning from the wilderness, the city, within our own souls. It's a call to change, to return to the ways of God, to seek goodness in God, self, and neighbor—ALL.

I initially wondered what a female version or image of John the Baptist would be?  All I envisioned was some variation of the cartoon cave-woman, Wilma Flintstone, going from cave to cave with the latest news and a baked goodie of some kind. I used to love the cartoon characters, the Flintstones, as did my children: Fred and Wilma Flintstone with Barney and Betty, their BFFs.  Here they are, Wilma at left. 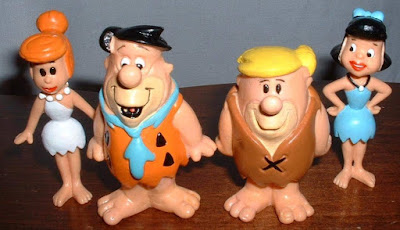 But let’s be serious. John the Baptist is a biblical character, not a cartoon, and a key figure in the New Testament stories of Jesus of Nazareth. He was a fierce and deeply honest biblical prophet, the “voice of one crying in the wilderness.” John was mostly associated with dire news: Change before it’s too late, you brood of vipers! Also, a bad wardrobe: clothing made of camel’s hair; and a lean and strange diet: locust and wild honey. His job description was stark: baptizer of frightened hordes in the Jordan River and preacher of a new reign. And his death, like Jesus’s, was brutal and violent—imprisoned for treason by Herod Antipas, ruler of Palestine (4 BCE-39CE) and beheaded at the whim of Salome, a young girl who danced for the king at a banquet and requested the head of John the Baptist in payment for entertaining the drunken Herod and his court.  (See Midrash , "The Vow" by Lyn G. Brakeman in her book The God Between Us: A Spirituality of Relationships).

Jesus’s day, like our own, was beset by unrest, fear, distrust, and persecution of anyone who resisted the tyrannical ways of oppressive authority. Classism was then, as it is today, a most terrifying sociocultural plague. John the Baptist and Jesus preached God’s reign of justice, peace and hope for the poor and oppressed. If ever there was a time to heed the Baptist’s cry of CHANGE! it is now. This eccentric figure frightens us with his warning to be alert in bad times while choosing the path of Good. His clarion call for repentance, although terrifying, also brings hope against hope.

All the images of John the Baptist I found were either too stylized/religious, or too bloody, or for sale only. I wanted an image that was fierce and noble, one that bespoke a story of terrorism and greatness all at once, good news and bad in one. Then I ran across C-Boy. 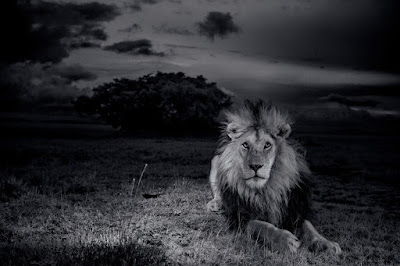 C-Boy was an African lion who lived a longer than average life (14 years) for an African lion.  According to “Elegy for a Lion”  in National Geographic Magazine, December, 2018, this lion was admired for his “tenacity and fierce spirit.” He would be my John the Baptist image. “He was everything an African lion should be: resourceful, cantankerous, patient, proud but pragmatic, seemingly indestructible, continually imperiled, and gorgeous to behold.”

No one knows how C-boy managed to survive in the wild and live as long as he did, breaking the mortality record. We do not know why he got a second chance at life after a battle with killer lions. The number one cause of death for lions in an undisturbed environment like the Serengeti National Park, Tanzania, is other lions. Like John the Baptist, C-Boy gives us a story of mystery and hope that lives on. No one knows how John the Baptizer survived the wilderness and managed to risk provoking hostile authorities for as long as he did—long enough that Jesus sought him out, followed his teaching, and continued what John started. John and his follower, Jesus, live on in the memories and memoirs of the Biblical New Testament.

There are books, films, and animated versions of great Lions of God—Christ, Paul the apostle, and Judah of Israel. Now I have added John the Baptist to this regal leonine array. The Holy One is so vast as to require multiple images. Look in your mirror.