I loved Robin Williams. He made me laugh till I cried and cry till I laughed. He showed me true humanity, with all quirks and foibles, and perhaps a glimpse of true divinity as well. I also knew some of Williams's troubles with addictions and depression. With all this, he managed to share his gift of wise humor with the world. I mourn him. He died too young—63.

There's no sense, however, in making Williams an idol. He can't have been easy to live with (three wives.) The emotional climate he created rivaled biblical signs of any proper apocalypse, I'm sure. No idol, but an icon of grace, yes.

Charles Marsh, biographer of Dietrich Bonhoeffer, theologian and pastor, writes in Strange Glory about Bonhoeffer's choice to give his blessing to the conspiracy to murder Hitler, a choice for which Bonhoeffer was executed.  "Bonhoeffer realized finally that genuine humanness would forever wander into abstraction if it were not anchored in the history, suffering and religion of the Jews."

Bonhoeffer didn't bother to unravel the moral paradox of his action. Neither did Williams when he chose death.

Recently, Williams was diagnosed with Parkinson's disease. It was, I imagine, one too many diagnoses to bear, so he chose death—a sad but wise and moral choice. By faith, I believe that he finally has the peace that passes all understanding. To Robin Williams, I say, Alleluia, anyhow. 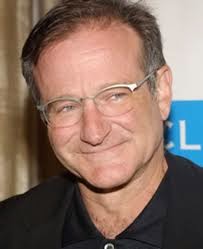 Here is one of the most beautiful spiritual tributes I've ever seen, written in a letter  by Jape Shattuck of Newport, R.I and published in the Boston Globe, on August 14, 2014:

"Each time we dream we create worlds of astonishing depth and detail that function perfectly according to their own strange logic A sound in the dreamer's environment can sometimes trigger the instantaneous creation of a new world, with new logic, in which that sound fits seamlessly into a vast unfolding scenario. Robin Williams was the only person I've known who could perform that same feat while awake, in front of an audience, and in such convincing detail that it felt like I was sharing his exquisite dream, a dream whose code revealed punch line after punch line while gently proving that the goodness of his troubled soul was the same as mine."

To Robin Williams, I say thanks. I will remember the life you gave my soul.  Will I ever forget Euphegenia Doubtfire?

Perhaps it is so that the plumbline cast by Spirituality plunges deeper than the one cast by Morality; thus, choices made from Soul-depth can be quite preposterously immoral. Sometimes, I do think that God is not essentially Moral Being, but simply Beloved Being.