Right now in Syria there is no law and order— and children are its victims.

Right now in the United States there is an excess of law and order—and children are its victims.

How can such a grotesque irony be?  I’m not suggesting that children are the only victims but a child’s vulnerability plucks the heart strings of the world. Such music is mournfully plaintive.

In Syria the ruling powers of government are battling for control and the country is in the midst of a devastating civil war. We all have seen the soul-wrenching picture of the small child face down on a beach. His name was Aylan Kurdi, age 3, and he drowned along with his mother as the family tried to escape from  their war-torn country in September, 2015. They hoped to find sanctuary through family in Canada. Below is Aylan before and after. It’s a good idea to look back and remember, so we can, in this case, see and know how far we have not come. 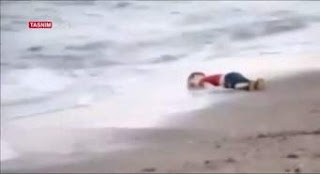 Aylan’s father remained alive and spoke of his grieving heart. Many times he repeated how “tired” he was of war. Tired. Tired. Tired. It’s Fathers’ Day here. Mothers have united against drunk driving and marched to protest any number of violent things that hurt children. Is it time for fathers to unite to protest and to march? The Bible calls God "Father" and Christians pray: “Our Father. . .”

Fathers! Rise up—not to fight but to make non-violent protest against violence against children.

Jesus of Nazareth told parables. They were puzzling stories designed to challenge his listeners to see things from new perspectives, and then figure out what if anything to do about their new understanding. Parables consistently challenged the platitude: “We’ve always done it this way.”

Today’s gospel was the familiar mustard seed parable. Jesus compared this mustard shrub to the kingdom of God: from a tiny seed of a nondescript bush grows a kingdom of glory, grace and space for every living thing in all Creation. Pretty laughable, right? Suddenly, as often happens with scripture, I thought of a mustard seed being like a small child. From the smallest children—even the dead ones, yes,—will grow and flourish the life of Godde on earth as it is in heaven.

How many children have to die because our government won’t legislate gun control?  I believe that the well-being of the whole is the responsibility of every individual. Children have an edge—little children face down on beaches, teens hugging and wailing because their classmates are dead and they are alive, children wrenched from their parents to make a point about law and order, one more parent explaining to a child that school is safe, then praying to God it is.

We need to change—radically—how we see things. In this country I think we have made an idol of our Chief Executive. Seriously, we all, friend and foe, are mesmerized (including avoidance in this paralytic strategy) by his every tweet and executive order, mostly designed, let’s be honest, to undo the executive policies of his predecessor. It’s more like dueling executive orders, one black, one white, than honest partisan politics with compromise and conversation. I smell the sin of racism, not to mention idolatry.

Idols hold all the power; idols demand and receive worshipful attention, yes, even if some worship by approach and some by avoidance. The attachment holds. Idolatry leaves no room for   the one holy and living God of grace. Religious people know better—or should.

And for Christians, Christ insisted—insisted—to the point of death that hope defeats despair and life defeats death. What a tall tale! Whether you believe Jesus rose from the dead or not, or in a God who continues to creates life no matter what, this wild message, this story, has persisted, and persisted and persisted. And persisted.

Fathers, rise up and proclaim!