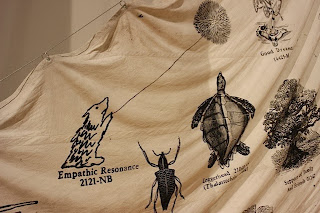 Is it possible that Empathy is the quality of being human and divine at once, and that empathy will save the world?

Look left to see an image created by artist Johnny Carrera. The image is entitled "Empathic Resonance" and is clustered with other images penned onto sailcloth which hangs as if strung on a mast.

The lovely title of Carrera's whole exhibit is "Hope Speaks Softly (But It Does Speak). Hope is my favorite spiritual gift. Hope is neither naive nor wishful. Hope is clear-hearted and mindful partaking of the divine.

Carrera's artwork was on display at the Massachusetts Museum of Contemporary Art (the Mass MoCA) in North Adams, Mass.—a field trip not to miss.

I was drawn to this little porcupine holding onto a string at the end of which hovers one lone star,  covered with what looks a great many of the porcupine's quills. I stood and stared at this image for some time and called my husband over to see it. He was less fascinated than I was, but that's the way the Spirit often works. We don't all get touched by the same things at the same time—except sometimes.

Gazing at the empathic porcupine I thought about the time when Supreme Court Justice Sonia Sotomayor was being screened at congressional hearings before her appointment as an Associate Justice to the U.S. Supreme Court in 2009.  Controversy arose and critique because Sotomayor identified empathy  as one of the qualities that makes a good judge. Why fear empathy? Maybe too soft, too womanish?

Me being me, I thought of the New Testament's reporting of Jesus' famed Sermon on the Mount with its radical teachings, such as "if anyone takes away your coat give him your shirt also." But then Jesus ends with: "Do unto others as you would have them do to you." (Luke 6:31)

This empathic porcupine still had some quills left for protection. He or she did not send ALL the quills to the naked star above, just enough to show he understood what it might feel like to be alone and undressed. The image of course could mean many things but that is what it said to me.

Perhaps God doesn't demand or command regular radical martyrdom but that you do in fact what you would have someone do for you? Give me some of your quills, some shelter, some money, some food, some of what you have until I can get on my feet, and if I can't, keep on sharing your quills and get other quilled critters to share theirs. Thank you.

Such decisions, I know aren't easy and require empathic resonance.

Yet, how else does Hope speak?