Occasionally, a homiletic reflection is offered that is hard as stone and true as the natal cry of Life. Below is one offered by the Rt. Rev. Alan M. Gates, Bishop of Massachusetts. I’m grateful! 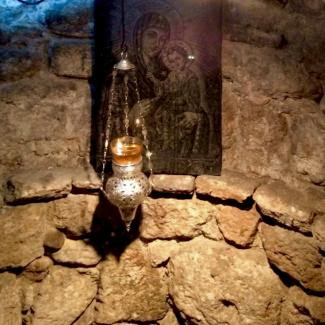 A manger hard as stone.  The poor little family arrived weary from the long journey.  A child was born.  Born in a stable, laid in a manger, so we say.  But in that time and place animals were sheltered not in a stable, really.  It was a cave, hollowed out of the rocky hillsides upon which villages were nestled.  For 20 centuries our human imagination has carried this story.  We place it in settings familiar to us.  Of course we do, because the story belongs to us.  So the holy family is imagined in a barn, and the child is laid in a wooden feeding box.  And that is right, for Christ surely is born into every land and time and culture.  But in ancient Bethlehem that night, that little homeless family was in a rocky place. The manger was hard as stone.

Walls hard as stone.  Twenty-first-century Bethlehem is criss-crossed with walls.  Concrete walls up to 25 feet high divide neighborhood from neighborhood, family from family.  Observation towers appear where the barrier turns a corner. Graffiti on the wall says, “Welcome to Santa’s Ghetto,” and “Ich bin ein Berliner” and “Blessed are the peacemakers.”  Pope Francis, on his visit to Bethlehem, made an unscheduled stop.  He walked to the wall, bowed his head in silent prayer, laid his palm against the cement and touched his forehead to its coldness.  In Bethlehem today the thousands of pilgrims that for centuries flocked to the place of Jesus’ birth at Christmas have dwindled to a trickle.  Too divided.  Too dangerous.  Too broken.  The walls in Bethlehem are hard as stone.

A heart of stone.  The Hebrew prophets knew the stony human heart.  They saw wanton cruelty and needless starvation; sacking and looting; the destruction of God’s temple; plunder and fire and blood and death.  Such hardness of heart has endured in the ensuing millennia.  Crusades and inquisitions; genocides and holocaust; bombs taking planes out of the sky; chemical and biological warfare; murderous attacks in schools, clinics, houses of worship; immigrant children held in cages.  In the face of humanity’s murderous ways, came Ezekiel’s clarion prophecy:  "Thus says the Lord God: … I will remove from your body the heart of stone and give you a heart of flesh.” [Ezekiel 36:22,26]  The human heart can be hard as stone.

But listen well:  In that infant birth–and in the life, death and resurrection that followed–God in Jesus proclaims that the joy and peace of the incarnation will not surrender to the terror of Herod’s day, nor ours; that vulnerable love is stronger than hateful death; that trust is stronger than suspicion; that faith is stronger than fear; that innocence is stronger than cynicism; that life and love are God’s will for us, and are our ultimate destiny.

In the beginning was the Word, and the Word was with God, and the Word was God. … In him was life, and the life was the light of all people.  The light shines in the darkness, and the darkness has not overcome it.  [John 1:1,4-5]  This is the message of Christmas.  Not the stony human heart, but the compassionate and imperishable heart of flesh is what we proclaim, 2,000 years ago, and emphatically now.

Christmas blessings to you!