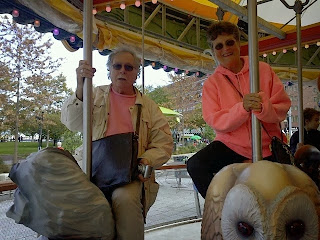 So here we are, Dick and I,  on the new carousel at the Rose Kennedy Greenway in Boston.  You really don’t need a grandchild to do this but it helps if one is along for the ride. Such joy!

I sought out the owl, my totem, and Dick sat on the animal next to the owl. His totem is a stallion but there were none. “”I wanted to make sure I got one that went up and down while it went around,” he said. “What am I on?”  “A skunk,” I said and we howled.

This carousel is unusual. It has no horses, just an amazing array of 14 non-stereotypical carousel  critters—three types of butterflies, fox, lobster (think Gloucester), seal, skunk, falcon, whale, owl, grasshopper, sea turtle, sea serpent, and a beloved cod (think Cape). The project was the dream-child of Amalie Kass who wanted fun activity for Boston children and was the chief donor for the project.  Boston school children identified and created drawings of local and regional animals from which artist Jeff Briggs designed the colorful carousel steeds.

My mother, herself quite a child for many good emotional reasons, but also because of her extroverted hyper-cheerful personality, so different from my more introverted serious one, turned FUN into an art form. It made me a bit shy about fun.

I guess our ideas of what fun was were divergent. For Mom it meant doing things, going places, activities. For me it meant inventing games, curling up with a good book,  writing a bad but heart-thumping poem, giggly conversations with girls, exploring city apartment house basement crannies, making up stories about teachers, creating outdoor forts and rituals, and dancing (clumsy leaps) flailing colorful scarves and shawls to Strauss waltzes.

I traveled the world of my imagination and Mom was a social butterfly. As a child I wished she would alight. This carousel is just the kind of project Mom would have rejoiced in. Next time I go I will ride on one of the butterflies in her memory and in her honor—and have FUN.

Whatever way you have fun it's spiritual when it makes you feel alive —alive-O!