Here’s what Izzy looked like when she was a tween, that is between single number ages and thirTEEN. Twelve seems like the longest year. 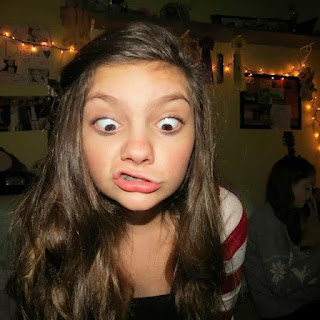 She has just turned 13 and is bursting with hormones and mood swings. A seminary professor once compared a grinning ball of energy called a teenager, suddenly appearing without warning on a stair step as you’re ascending carrying a bundle of laundry, with the Holy: a mysterium tremendum et fascinans.

Teens are a tremendous and fascinating mystery.  They are goofy and wise, in your face and secretive in equal measures.  I remember one of my sons as a young teen asked for a hairdryer with a style comb, a stuffed teddy, and a lock for his door—all for Christmas. He got the first two.

Then she wrote a small prayer: "God please help their families and friends cope with this tragedy."

By the time Izzy is old, like her Grammy, I bet she will post a prayer also for the murderer, the one just as holy though not as innocent. And post a prayer for his mother, whom he shot before he went on his rampage. I bet Izzy will think of that,  because that’s how she is at heart.

No one really knows why this happened, and may never know.

The young man was developmentally disabled, and himself a “child” of 20. He shot his mother who had tried to love him, and then headed for the school and sprayed bullets around the office and first grade classrooms in a Newtown school. And finally he shot himself.

These two more lives were lost also in this holocaust.  These two lives are grieved by someone somewhere—and in heaven.

But the reported death toll has been consistently reported at 26, and that’s what I read in most newspaper articles and heard on television. Twenty-six. 26.

Twenty-eight lives were lost on that fatal day. 28.