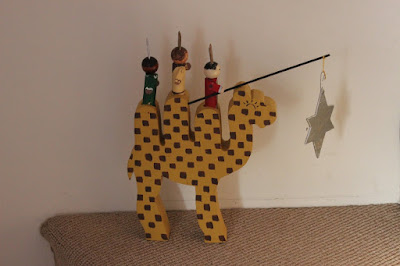 We in the northeast are in the middle of our first big snow storm. It’s no time to venture out—unless you’re a Magus in search of something more.

I stare at this beautiful and whimsically visionary image created by my sister and her late husband  many years ago.

The image is symbolic. It honors the three Magi of biblical story. They are out at night on a dangerous mission. All three together sit astride a single camel, with three humps, one for each of them.  All three wear crowns. The flirtatious camel winks. The image stands for hope in a new kind of world in which all people and their leaders are on the same page (or camel) truly committed to equality, justice, and compassion for all living things.

It’s hard to see the three faces in this photo, but one is black, one oriental, and the third, riding high in the middle, is obviously a woman. It’s comical. It’s prophetic, and it’s a work of art that articulates a powerful biblical message of universal wholeness fueled by Hope—against hope. Here's a close-up. 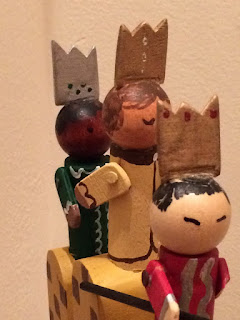 These three storied Magi in the New Testament set out in the deep darkness of night on three camels to follow a star and a promise they sense is of God—the impossible possibility of a new kind of "king" for the world as symbolized by a newborn child lying in the hay in an improbable stable in Bethlehem.

As the story goes, they went at night for fear of the Judaean acting king (37-4 BCE) King Herod's  jealous rage. They returned home by a different route to deceive Herod who had uttered a sycophant-ish request about the whereabouts of this infant—that he too might go there to worship this new monarch. The Magi were political figures of some wealth. They wanted change and had followed a star that looked exceptionally bright to them. There are such stars of course, especially when your heart is expanded by hope beyond hope and things appear brighter than they are. That’s the power of mystical inspiration— sight and insight. It is what empowers us to keep on keeping on—no matter what. It’s why we keep telling the same story. It’s why we call such impulses spiritual—godly.

Hope has been the driving vision of the Obama administration (2008-2016) in the United States. President Barack Obama wrote a book called The Audacity of Hope. We have seen what many thought was an impossible hope: a black president and the hope of racial, ethnic, religious, and sexual diversity with safety and freedom he and his family represent.  (It isn’t about policy or party politics, it’s image.)

In her recent farewell speech to a group of school counselors, First Lady Michelle Obama articulated this “star”:  “The infusion of new ideas, and cultures and talents is what makes this country great. . . . Our glorious diversity is not a threat to who we are, it makes us who we are.” She invited all young people to take this star into the future, to get a good education, to think critically and creatively, to believe in the power of hope, and then work for the vision. I wept.

Will we follow? Will we be like those Magi, risking deep desert darkness and hostile powers, filled with hope, spiritual and political, bringing their wealth to invest in something new. Godde knows we all have followed the wrong star from time to time and invested in empty errant causes. But we don't lose hope or stop trusting God. Nor do we stop envisioning new possibilities—always wishing upon a star.

Three courageous outlaws pushed on through the cold desert night. Their apparent insanity, it turned out, was remembered and recorded in the Christian gospel of Matthew as well as other Roman writers, all proclaiming a new message to the ancient first-century world darkened by oppression, inequality, and desperate fear. This is why some Christians celebrate Christmas on January 6, el Día de los Tres Reyes, Three Kings day. It is why Christians honor a whole season called Epiphany, the season of light, a season to follow stars that look bright with hope.

The Magi were wise adults, and their pilgrimage of hope inspires us forward as powerfully as that babe in the manger. As Michael Hudson writes in his Meditation on the Journey of the Magi:

God gave the child to love the world
that noticed neither child not light;
but love grew up, a brighter star,
to guide a pilgrim through the night.

May we follow their Hope and make it our own.