Monday evening we saw a film at Episcopal Divinity School. The film is the project of producer/director, Alice Bouvrie and entitled "Thy Will Be Done: A Transsexual Woman’s Journey Through Faith and Family" starring Sàra Herwig along with her mother, her ex-wife, her spouse, her daughter, and her pastor the Rev. Jean Southard.

The film is a poignant, prophetic and tender witness to the kind of transformation that can happen when a 21st century “david” challenges any contemporary cultural or institutional “goliath.”  No one is left untouched; no one is left unharmed; no one is ever the same. A scene from the video: Sàra and a friend. 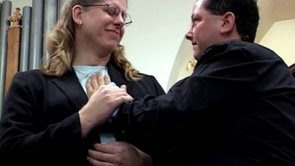 My husband and I went because we are both passionate about the ultimate value of spiritual diversity and the wholeness of all religion, particularly Christianity, in spite of itself.

Herwig opens the film with a statement of respect for those who kept her from ordination. "They believe their interpretations of scripture and their understanding of Christian faith is true." The rest of the story is the “but........”

What came through most strongly to me was the amazing grace of the supporting cast:
Sàra’s mother whose painful perplexity and guilt were reinforced by the men in the family. Mom's love for her child superceded all abuses and all confusions.
Sàra’s  first wife who married her when she was a man and imagined she could “love” him out of his depression and his compulsion to cross dress. She is now able to say that Sàra is “better” than Steve was, empowered and happier, the “black cloud” gone.
Sàra’s daughter whose entire perception of reality was “flipped on its head”  when suddenly she had “no Dad.” With help she came to know that her “dad” was the same person s/he always was even if walking into the same public restroom together was “really strange.”
Sàra’s pastor, the Rev. Jean Southard of First Presbyterian Church in Waltham, MA., whose husband is a cross dresser and an “out” professor at MIT, continued to support Sàra’s sense of vocation to full-time ministry and officiated at her marriage against traditional church protocol. Why? “The Church was not being Christian to her,” Jean said.  Simply so! Charges were brought against Jean Southard but, with legal help and three years of trials, she was acquitted, on a technicality no less: the Presbytery had not yet legally declared the prohibition against same sex marriage for ordained people at the time of the marriage of Sàra and Jen which Jean blessed. Sàra was a candidate for ordained ministry in the Presbyterian church at the time of her marriage.

PCUSA (the Presbyterian in the USA)  still does not allow anyone in a same-sex relationship to be ordained, but they are asking for more education on the matter.

Rev. Southard is patient. “Also I’m retired now,”she said with a smile. She holds all institutions loosely and understands that they are made up of human goodness as well as human limitations. Without the church, she noted, who would guard and pass on the treasures of religious traditions?

The film's supporting cast took nothing away from the courage and witness of the main character,  Sàra herself, who traversed the muddy waters of profound personal and institutional change and never gave up on herself or on God.  All these women seemed to me like the women at the foot of Jesus’ cross or those who brought the biblical David along.  They never gave up and never abandoned. They represented the unconditional divine love Sàra had found in a Christian church in eighth grade, and herself never gave up on. They were the image of God in the flesh.

Sàra Herwig has left the Presbyterian church. She made it to candidacy with a vote of 48 to 24.  Impressive. The vote came after an unusally long, grueling screening process. Sàra prevailed in spite of prevailing attitudes (ignorance really) and comments like, "God made you a man. Pray for healing."

Sàra did pray and felt God's presence still with her. But she was not able to find a congregation that would hire her.  “You have to have a job before you're ordained. It takes guts to hire me,” she quipped, adding, “It all comes down to sex and there is so much more to a relationship.”

I'd say God sees beyond genitalia and into souls.

The UCC (United Church of Christ) has plenty of its own hoops and hurdles but Sàra hopes to realize her ordained vocation in that denomination which has "more promise" for her.  “You can only hit your head against a wall so many times before you split it open. I'm moving on but in my heart I will always be a Presbyterian.”

We keep on keeping on. I did when I was struggling through ordination process in the Episcopal church in the early '80s. And I was just a woman!!  Some days I would question my sanity. I lobby for change and wait. Tempted to leave but I don't.

Sàra and her friends are hanging in too. We sigh and pray and wait. The Church is not useless. It just lumbers and slouches under its own weight until finally it opens up with a giant sigh of relief—then moves along.