On International Women’s Day this year the former president of Ireland, Mary McAleese, delivered a keynote address, “Time Is Now for Change in the Catholic Church,” to a full house at the Jesuit Curia in Rome. The event, entitled “Why Women Matter” was sponsored by Voices of Faith, an international women’s organization.

Now why would I, an Episcopal priest, care about the politics of Ireland and the Roman Catholic Church?
-Because Catholicism is the largest religious faith in the world and what happens there matters to us all. It’s naive to think otherwise.
-Because Ireland’s former president is a brave woman whose blatantly honest words are still relevant and have even prompted a civil exchange between an Irish bishop and herself.
-Because for years I’ve harbored a strong antipathy toward Ireland, or at least the Irish Catholic Church.

I write in part to heal my own irrational anti-Ireland hatred. I’ve felt this ever since I saw the movie, “The Magdalene Sisters” in 2003. Oh yes, I know how beautiful green Ireland is, and I know it has changed over the years, and I know this is about the Irish Catholic Church not about the whole country, but . . .

“The Magdalene Sisters” is set in Ireland in 1964. It’s a true story of four teenage girls who were committed, by their own families no less, against their will, to Magdalene Asylums (also known as Magdalene Laundries) an institution run by Roman Catholic orders from the 18th to late 20th centuries. It was an institution of confinement for “fallen” women. After a mass grave was discovered and media investigations occurred, a formal state apology was issued in 2013 and a compensation package was set up for survivors.

The Roman Catholic Church has to date refused to contribute to the fund. Some religious orders have contributed to a compensation fund, including the Religious Sisters of Mercy of which I am an Associate—and proud.

The film was made to publicize atrocities and to make money for compensatory practices. I tell you it’s the only movie I’ve ever seen that gave me nightmares— and still could if I allowed it. Maggie Smith played the sadistic Mother Superior who presided over this torture. I love Maggie Smith, but in this film I had a hard time remembering that she was an actor playing her role. Her embodiment of the Christian Gospel she vowed to serve was violently opposed to Christ’s kingdom of heaven on earth.

The “fallen” girls whose stories the movie focuses on were considered in need of redemption. One was raped; one was beautiful and normally flirtatious; one an unmarried mother; and one an intellectually disabled unmarried mother. These girls, innocent save for their gender and its natural expressions, endured unspeakable cruelty while imprisoned like slaves in forced labor camps. Some had spent their entire lives in this toxic squalor.

Humiliations, such as satisfying Father XXX’s need for penile stimulation, being paraded for regular breast-size contests, complete isolation from family, including their children and babies they were forced to give up, and the outside world, and harsh labor, not to mention constant verbal and physical abuse, were wrenching to watch. The girls coped by befriending each other and snatching late night times to engage in conversation, otherwise forbidden. Once they got even by placing poison ivy into the washer with Father’s linens, then watching him jump around frantic with itching.

The only way a girl could get out was if a relative of age, that is 21, came to get her and attest to her sanity. One girl of twelve had to wait until her little brother who had been seven when she was dragged off in the night by her father, got old enough (do the math) to come for her release. Release meant what was left of a lifetime suffering from torturous post-traumatic paranoid stress and terror of the Church, probably even of God.  “Redemption” for these Magdalenes consisted of hell on earth.

I was shocked by the institutionalized cruelty, horrified that no one had bothered to notice that history has redeemed Mary of Magdala who was falsely branded as a prostitute, and even more shocked when at the end of the film I learned that these laundries did not get disbanded until 1996. I’d fantasized that all this must have happened in a former century!

These women had been trapped in a culture whose dominant religion was so fouled by misogyny that in 2018 former Irish president McAleese would still call it “an empire of misogyny.”

McAleese met Boston’s Cardinal Bernard Law in 1988. They had a verbal battle after he commented that he was “sorry for Catholic Ireland to have you as President.”

McAleese was elected president in 1997 and served till 2011. She succeeded Ireland’s first woman president Mary Robinson and was the world’s first woman to succeed another as President.  She was also the first President from either Northern Ireland or Ulster. She worked as a barrister and a journalist and championed issues of justice and and social equality and inclusion. Imagine! As I read about McAleese my anti-Irish feelings softened. McAleese is also a practicing Roman Catholic who boldly and bravely critiques her religion. She has redeemed my hostility. 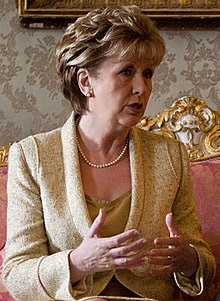 McAleese’s words ring prophetic: “Back in this hall in 1995 the Jesuit Congregation asked God for the grace of conversion from a patriarchal Church to a Church of equals; a Church where women truly matter not on terms designed by men for a patriarchal Church but on terms which make Christ matter. Only such a Church of equals is worthy of Christ. Only such a Church can credibly make Christ matter. The time for that Church is now, Pope Francis. The time for change is now.” McAleese said in a BBC interview. “A Church that is homophobic and anti-abortion is not the Church of the future.”

It was time then, 22 years ago, and it is more urgently time now!  Do we have such credibility in any religion?