Well, I guess if the inimitable and great British artist Helen Mirren can tell a bunch of gay drummers on parade in London to “fuck off” then the lid’s off, no?

Mirren, earlier this month, was playing Her Majesty the Queen in a delicate play called The Audience.

Her F-outburst had merit, considering that London theaters are right on the street and the furious enthusiasm of a parade of drummers was interfering with both the actors’ concentration and the theater-goers’ ability to hear their lines. So Mirren swept out into the street at Intermission and in full regalia told the blighters,“Shut the fuck up. People have paid fucking a hundred pounds for their theater tickets.”

How politically incorrect can it get? But it was a parade-stopper. Mirren said she felt badly. AND:  “Something had to be done.”  Good on! commented a gay friend and Mirren fan.

Helen Mirren, according to my beloved spouse, somewhat of an amateur actor himself, is sort of a “fishwife”—not a woman who sells fish. But is there such a characterization for a man who might tell his female wife, his female nurse, his female secretary, et al. to fuck off several times a day?  Who’s ever heard of a fishhusband?

The humorous twist in the F-story is that she did this while in costume and make-up for the role she was engaged in as QEII.

The gracious twist to Mirren’s fishwifery is that Helen Mirren, not on stage but in real life, recently stood in for the Queen to answer the dying wish of a 10 year old Downs Syndrome boy beset with spine cancer. He wanted to go to Buckingham Palace and have tea with the Queen. Mirren took the boy and his family to the Gielgud Theater, a fine substitute for the palace, and afterwards took them back stage for tea and cakes and a visit with the corgis (see below) who had played their parts in the play.The boy was transported. Mirren played both herself and her royal role with grace.  Even the family admitted it was hard to tell the difference between Mirren and Her Majesty; the boy never knew—and, to that family, it did not matter. How fucking royal of Mirren! 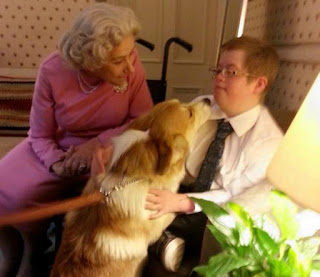 What is most real is most spiritually correct, if not politically so.

To tell you the truth, I love the explosive expressiveness of the F word and use it myself. I’ve never used it from the pulpit but there are times I’ve thought it might fit, even, or especially, from the lips of Jesus or Moses.

Some times political correctness or the rules of civil decorum, especially around the parameters of being a “lady,” might be chucked—or fucked.

HOWEVER, Helen Mirren isn't Dame Helen Mirren for naught. She attended a concert of the drummers a few days after she'd insulted them on the streets. She went to support them and their performance and to make amends  for her own "performance."