My seminary learning experience at Yale Divinity School took place in a religiously diverse environment—one reason the school continues to thrive and is economically viable. But it isn’t just the sensible economics, or even the obvious ecumenicity, that gives this school, or any school, a soul of its own. It takes real people and real stories.

Nellie was a student with multiple challenges. She’d been in a car accident on her way to begin her college education. Her mother was driving. It was an accident—an accident that left Nellie with severe brain damage, unable to walk or talk except in very halting and barely intelligible ways. I was scared of Nellie. I didn’t know what to do or how to be with her, or what to do with my shame. I admit I avoided Nellie and feared for myself as well—hardly exemplary of a woman who wanted to serve God in ministry or take a shot at christlikeness.

I wondered how Nellie had forgiven her mother. I wondered why Nellie wanted to go to seminary and get ordained in spite of her severe limitations. One professor, an Episcopal priest, worked with Nellie as a tutor. He typed out her words for papers, and made sure she was accompanied safely to and from her classes. It all felt like a full-blown miracle to me—too difficult to digest.

Yet Nellie was a vibrant presence among us stressed-out, worried bunch of first-year seminarians, most of us not knowing a damn thing about this God we were there to study, if not master. Nellie stood out for her smile. Some days I thought she herself was a prayer. How could she seek God after all that had happened to her?  Some students reported that when she had a beer or two her speech suddenly became intelligible. Nellie’s being there among us must have had something to do with the impossible love of God—the love that scared me and made me run the other way.

Now I wonder if Nellie's passion for God was not for the God the church traditionally presents, the Omnipotent one with all the power, but rather for the God she found in her own broken heart—the same one I’d found in mine as a young child.

I’ve thought a lot about Nellie over the 35 years since I graduated. What ever happened to her?

Nellie did graduate from Hampshire which took her seven years. In that time she felt called to serve God. “Serving God became her salvation,” wrote Michael Vitez, journalist and Director of Narrative Medicine at Temple University’s Lewis Katz School of Medicine in Philadelphia. Vitez has written Nellie’s story for his book on the healing power of story.

Nellie went on to graduate from seminary and was ordained a deacon in the Episcopal Church in 1993. She served in Chestnut Hill United Church (formerly United Methodist) until 2014 when she retired. It would take Nellie as much as five weeks with blurry vision and one palsied finger to type out 2000 words for a sermon. She then selected different parishioners to read her words to the congregation. Oh Godde, what a privilege! Nellie attended the Episcopal General Convention in Denver in 2000, where a special ramp for the entire altar procession was constructed so Nellie could read the Gospel using her voice box.

Here is a photo of Nellie on the steps of the Philadelphia Museum of Art. You see she is still smiling that smile I remember so well, the soul-smile that made Nellie shine. 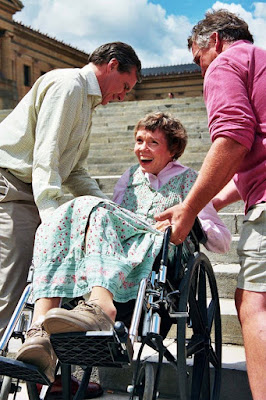 Only recently have I fully understood and wept deeply for Nelly and for me. The painful beauty Nellie gave me, stirred up as I read about Ed Bennett (1959-2017) in my Yale Alumni Magazine. Ed became a quadriplegic after a diving accident just before he entered his sophomore year at Yale University.

Here is Ed at a wedding in 1990, surrounded by his Yalie friends who called him “Edder”. 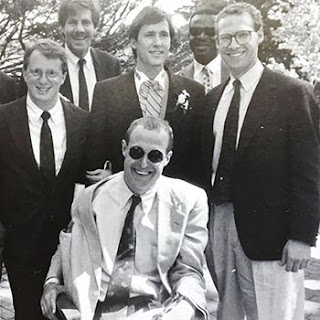 “Can I piece a life together?” Ed had asked a rehab psychologist, Lester Butt, when he was facing life with minimal movement in one arm only.

“Can you still love?" Butt replied.

The rest of Ed’s wheelchair-bound life was spent living the answer to that awakening question in the affirmative. He was the first quadriplegic to graduate from Yale College and went on to attend Yale Law School and Yale Divinity School but did not complete those degrees. He didn’t think his temperament was suited to pastoral work, although friends remember Ed as one with an “uncanny ability to bring people together.” Note that smile! The church could have used him. I wish he and Nellie had met. Obviously, they both could still love.

“I have thought a great deal over the past few years about what is important to me. Perhaps my paralysis, maybe my acute experience of mortality  . . .  something has forced into my intimate, quiet moments the sense that God matters. My friends matter. The suffering of other people matters. And when I look at my profoundest satisfactions—friends, ideas, helping others, family—I do not see political or intellectual connections among them. Instead, I see a world of subtlety and wonder that lives in the spiritual world.”

Can you still love?

I’m trying, Ed and Nellie. Thanks to you, I’m trying. And thanks be to God whose Hope incarnate forgives me—over and over—in my own clumsy efforts to love. And thanks to the Spirit who gives me eye and heart to spot healing stories, call them gospel, write them down, and send them forth—seeds for healing.