Most people think the “American dream” is that every American family will own their own home equipped with picket fence and other trimmings. Proprietorship is our dream and our downfall. Private property is our desire. Mine. Mine. Mine.

No, the American vision is far more extraordinary and far less selfish than a selfie. In a moving essay, “Mr. Lincoln,” published in a 2018 commemorative collection, Sweet Dreams, Story Catcher, the late Brian Doyle boldly proclaims: “He (Lincoln) gave his life for the extraordinary American idea. Do not let that idea die.” 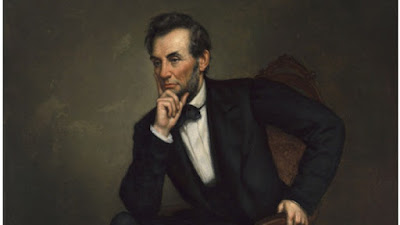 That’s my prayer every day now. On July 4 it was my firecracker.

When I was in seventh grade a teacher asked us to identify someone we thought was the greatest human who ever lived—our hero. I immediately wrote Abraham Lincoln and felt quite sure of myself. I was thinking about ending slavery, winning a war for our side. Soon I was stricken with guilt because I had not identified Jesus as the greatest man. My guilt doubled when I realized that I’d never even thought of a woman—an unimaginable idea back in 1950. If I’d known enough I would have nominated Eleanor Roosevelt (below) even though my parents detested FDR. 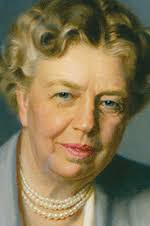 Now I wonder: was I so wrong in seventh grade?  Lincoln, yes, had something to do with the Civil War, a war he grieved every day of his life, but his vision went far beyond my narrow idea. Lincoln, like Jesus and Eleanor, had a gospel, a vision of Union—American oneness. Beloved fools such as these often die for their ideas. Christ’s was not restricted to one country, or just to humanity, or even to one religion, but I wasn’t so far off when at twelve I nominated Abraham Lincoln—that we all may be one. Jesus (an artist's portrait below, left) was remembered for drumming this home—over and over. And Brian Doyle, a Jesus look-alike (below right) kept the vision going. 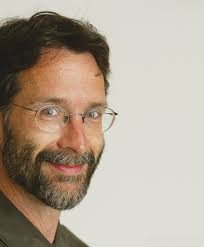 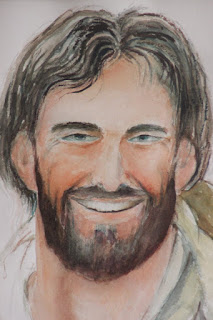 Doyle wrote of Lincoln:   “. . . he could not stand the idea of Americans not walking hand in hand toward the extraordinary country we could be, a country unlike any other that ever was, a country where all citizens are free to speak their hearts, and gather as they like, and worship whatever shape of holiness they perceive or imagine, and offer their love to whom they like. He would not allow his beloved country to fly apart because of greed and lies, and for that he was murdered by a man whose greatest wish was to tear America in half.”

Lincoln was a complicated man and had many quirks to say the least. A friend who knew him well once wrote of Lincoln: "He was the only man I ever knew the foundation of whose spirit was love." That’s crazy; that’s only for God, right?  Or is it?

“It is a foul and evil lie of the mind and the heart and the mouth and the soul to account someone less because of his or her color or religion or gender or preference in lovers. That is a squirming lie, no matter how often, and at what volume, it is repeated and God willing it will be quelled and squelched and forgotten in the years to come. It will be squelched not by laws and regulations, not by political or religious or judicial powers, but by shivers of dawning light in the hearts of men and women and children in this country who begin to dimly understand that Abraham Lincoln was the greatest of Americans not because he won a war, not because he gave his blood and his life for justice and freedom, but because the foundation of his spirit was love and he acted that way.”

Lincoln was devout but practiced no one religion. His speeches were concise and brought people to silence. His ideas and parabolic stories, without a lot of advice or legislative patter, riveted the attention of his colleagues and branded the American soul forever. To our peril we let this dream die. This isn’t about Mr. Trump or any party or governance, it is about WE the people standing for the freedom for which we stand.

Doyle writes, dare I say prays, it best: “ . . . that we will, by the grace of the profligate gifts granted us as Americans, stand for and speak for and defend and protect freedom anywhere and everywhere it is savaged; that we will continue to, as we have for centuries, open our golden door for the tired and the poor, the huddled masses, the wretched of the world, and here let them breath free; and that difference in color and gender and religion and preference in love matter not at all when it comes to treating each other with respect and reverence. Those who fan and foment differences murder the revolutionary American idea, and ought to cower and gibber in shame in the vast shadow cast by Mr. Abraham Lincoln, Republican of Kentucky, who gave his life for that idea.”

I guess I wasn’t too far off in seventh grade. Do not let this idea die. Do not.
Posted by Lyn G. Brakeman at 2:14 PM No comments: