2018.10.07 A Visit To The Farm: Sweet Memories Build Spiritual Resilience

First, there were no leaves of color on the green summer trees, even in upstate New York. There was torrential rain and bleak landscape covered mostly with fog. This should have dampened our spirits if that was what we’d hoped for. It didn’t.

We were looking for bright memories not bright colors—heading for Ancramdale to visit the farm where I’d spent summers as a child. Along the way I kept looking for Route 22, the one my parents had traveled from the big city Manhattan, leaving the minute school got out for the summer. I would get so excited as we drove up Route 22, I thought it would take forever. I felt the same way as Dick and I drove along, and I chattered to him about the Ancramdale chapter of my life. Route 22 finally appeared—still there.

I’d regretted my parents’ decision to summer in Westhampton, L.I. when I was ten or so. I guess it was the upwardly mobile thing for a “Mad Man” and his young family to do back in the 1940s. But I missed the farm, my pony, the old swimming hole, my best friend Bella, and the big red barn with its hayloft from which we’d swing on a rope like monkeys. I loved being around animals I’d only seen in picture books: cows, horses, even grunty pigs. I did not miss the big fat beady-eyed rats or the fiercest loudest scariest mountain thunder storms, the likes of which I’d not known in the city. Even now as we snaked up 22, I conjured the dungy milky sneezy pungent hay smells of my barn. 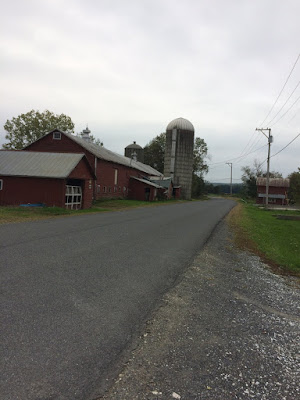 We found the things I remembered most and learned more about the Ancramdale backstory. My young parents weren’t dreaming of a rural getaway in February, 1942, but a business associate of Dad’s thought they’d love a free two-week vacation in the farmhouse he rented. I was three years old by then and my maternal grandmother would stay with me. My parents hopped on it. There was only one stipulation to this offer: that they not bother the Sommerhoff family, owners of the property who lived a short few blocks away at their place, The Sommer Hof, German for summer court or small enclosure. They kept their promise not to bother the Sommerhoffs, but the Sommerhoffs had made no such promise in reverse—and thank God for that.

The weather was unusually frigid, well below freezing and with strong winds. The little cottage had no heat and so many holes that the wind whistled through it. There was a fireplace around which my parents huddled and shivered. They moved their bedding to sleep there. My mother reported that her Coke froze solid. Probably Dad’s gin didn’t freeze.  The Sommerhoffs, Kurt and Ba, worried and debated. Compassion won out and they called my parents just to ask if they’d like to come for a hot meal and a hot shower. Salvation! Thus began a solid friendship of 26 years.

My father wrote a poem about this amazing friendship—all printed out and framed. Though not signed, this poem and neat printing is Dad’s voice and heart. I’d know it anywhere. 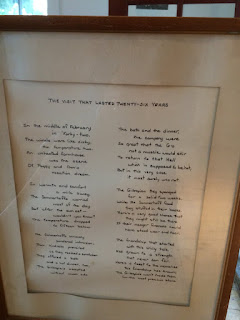 The Visit That Lasted Twenty-six Years

In the middle of February
in ‘Forty-two,
The winds were like sixty,
the temperature two.
An unheated farmhouse
was the scene
Of  Peggy and Don’s
vacation dream.

In warmth and comfort
a mile away,
The Sommerhoffs worried
most of the day.
But after the sun set—
wouldn’t you know?
The Temperature dropped
to fifteen below.

The Sommerhoffs seriously
pondered intrusion;
Their kindness prevailed
as they reached a conclusion.
They offered a bath
and a hot dinner, too;
The Gillespie’s accepted
without much ado.

The bath and the dinner,
the company were
So great that the G’s
not a muscle would stir
To return to that Hell
which is supposed to be hot
But in this very case
it most surely was not.

The Gillespies they sponged
for a solid two weeks,
While the Sommerhoff food
they stuffed in their beaks.
There’s a very good chance that
they might still be there
If their meager finances could
have stood wear and tear.

The friendship that started
with this chilly tale
Has grown to a strength
that never can fail.
Here’s a toast to the memories
this friendship has known;
The Gillespies won’t trade them
for the most precious stone.

We Gillespies never stopped going to Ancramdale to visit the Sommerhoffs even when we no longer spent summers there. I remember my father’s cursing heartily at the chains we put on our car against the winter ice and snow. They would snap and break off as we snaked up 22.  He pulled over, jumped out, swore at my mother, and repaired the chain link. It was Ancramdale or bust. Even if I moaned  that I might throw up, he motored on. Mom supplied a bag in case.

Emilie Sommerhoff, daughter of Chris Sommerhoff and granddaughter of Kurt and Ba, and her husband, Job Yacubian, still live in the original Sommerhoff home, the one we called the big house, the house of hospitality. They were charming and we felt at home. 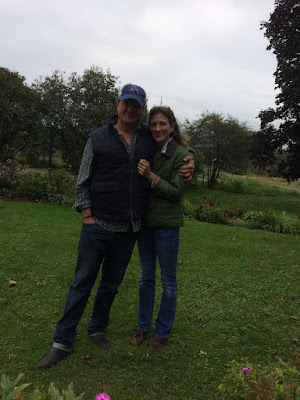 Ancramdale felt the same to me some 70 years later. Emilie gave me a tour of the house and lovely conversation. The amazing thing is that it is not very changed from my childhood memories, although it is not a mansion as I’d remembered. The small windows just under the roof are still there, the large playroom upstairs, and the rope bannister going down to the hearth room where we all spent much time by the fire singing and laughing and partying. The thick lambswool rug is gone now. That rug used to scare me. I was sure mice were nesting in its depths. Emilie grinned and said: “You were probably right.” I think she loves the humble place as much as I do. 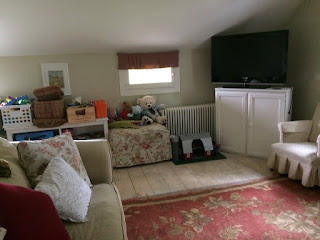 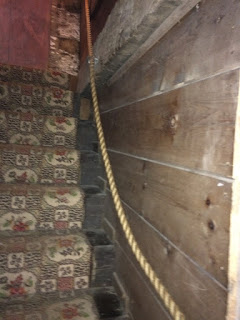 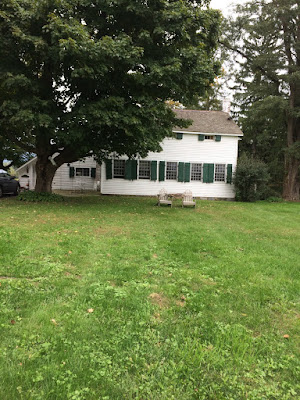 Before we left I had to find the farmhouse where my parents had originally stayed and where we spent so many delightful summers. Chris Sommerhoff and my old friend Bella helped me with an address. Here it is, now all spiffed up, painted red and obviously expanded. But I see it still it as the little white farmhouse with the vast cornfield next door. 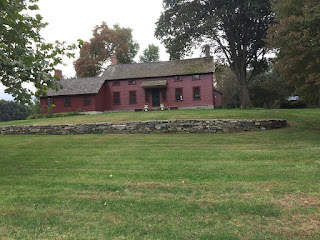 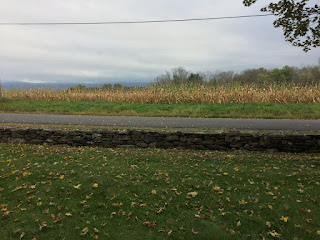 The vast cornfield where I used to run and play—hide from discovery—still stands. I’d run through its neat rows, completely hidden from view, and share all my secret wonderings with God and myself. Cornfields whisper back. Did you know that?

And sweet memories provide resilience and hope in days when anxiety lurks and slinks around the edges of both the personal and the national. I feel grateful Thank you Emilie for inviting us to come again. 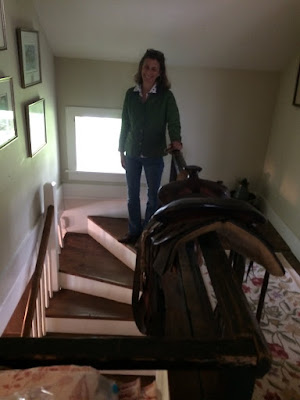