Who remembers Dzhokhar Tsarnaev? For some odd reason I do—not a lot but some.


I recall being shocked at a rather snarky Boston Globe commentary by Kevin Cullen who declared boldly that he would remember and honor the names of the wounded in the Boston marathon bombings but he did not want to remember the names of the perpetrators. These he wanted to forget, forever.
I bet his name is not on any prayers lists in any churches. 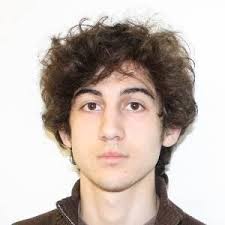 Why do we want to remember only the good, the heroes, the ones who are courageous and loving? Would we remember Jesus if there were not the grand idea of resurrection attached to his name?

I understand the feeling and its vehemence in the wake of such a tragedy.  Perhaps if I had a loved one who lost a leg I’d feel the same. But I wasn’t.

In the traumatic transition we call high school I recall my heart aching for the unpopular, the odd balls, the misfits. I tried desperately to fit in so I could shelter any defects, like flat-chestedness or shyness, in some tight-knit clique. I needed a category and a group.

When I was in grade school in NYC there was a girl who moved to NY from Russia. Her name was Olga.  She spoke broken English but enough to get along. She wasn’t pretty and wore odd clothes. I was among a group of girls who bullied her. We used to chase her down the sidewalks calling whatever nasty names that came to mind. She ran faster than we did and disappeared around the corner. I remember Olga. I do not remember my bullying companions, not even their names. Strange.

But Dzokhar was “bad”—a murderer, perpetrator of senseless violence. Yet I remember him and his name. Is anyone “bad”?  I don’t think so.  Everyone has a story and everyone does bad things, even evil things.

I’m not God or a spiritual hero. I just try to copy along when I can.
Posted by Lyn G. Brakeman at 2:59 PM No comments: