Sometimes the world seems just too darn big and unmanageable for this old woman. It's little things that keep me alive.

Have you ever been a “Mystery Reader”?  Me neither but we, Grammy and Grampy, were invited this May to be mystery readers at granddaughter Phoebe’s first grade class. We dove into the assignment with gusto.

We spent time choosing our book and rehearsed it well, not wanting to stumble over any words or be old fools in front of 6-7 year olds—brand new readers and possibly not prone to miss any tricks. We chose to read A Birthday for Frances by Russell Hoban,  illustrated by Lillian Hoban.  The Frances books had always been a hit with our now adult children. With us, too!


The story presents a situation of sibling rivalry and involves expert parenting and a transformation in a small six-year-old badger’s heart. We brought along some cousinly critters, tiny plush hedgehogs, as props. They served as a kind of Greek chorus of giggly squeals and hopping up and down, expertly executed by Grampy while Grammy read the story.

These children were the best audience imaginable. Not only did they listen well and give opinions about what would happen, but they sat so close, and focused their attention so intensely, it was almost disconcerting.

Phoebe of course was the star of this event. She had a birthday coming up in two weeks, which probably meant that Grammy and Grampy would take her shopping after school. A confident child about to be seven, she had a plan: first shopping for her birthday, then ice cream treats, then the playground. Who follows a grandchild’s instructions more exactly than grandparents?

And so it was: Frances, Pinky, vanilla with sprinkles, and vigorous play with applause. Thank God for grandparents—such obedient followers. Home again, Phoebe allowed her baby brother to touch Pinky—once. Just about what Frances did for her little sister, Gloria.

Our grandparental tour continued. We saw other families—almost all of the CT. clan—each one a delight. I learned something about myself, again: spending time with adult children and grandchildren—one family at a time—is important to me. I think they call this quality time. I’d call it holy time. Little things keep me alive.

One more little thing arrived two weeks later on the back of a note shaped like a pink cupcake: 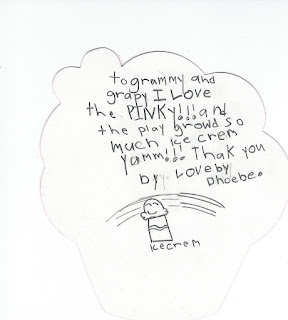