This lovely Michael Hudson text was written with Mary the mother of Jesus in mind, but I certainly know many open-hearted girls. Do you?

As I write this I'm thinking of one in particular, because it’s her 55th birthday. She is my oldest daughter, Beverley Ann Brakeman. She was born with much effort and also some “lucky” statistics: born on 1/13/63 at 1:13 a.m., weighing 8lbs13ozs. She was a big baby. She’s still a big presence, not in size but in vigor—and she has an open heart. (No significance to the Police van in the background:) 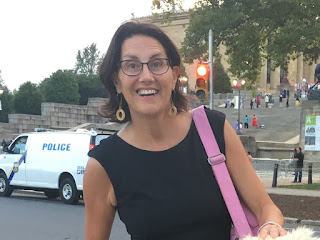 I remember how terrified I felt when I was birthing my first child. It hurt so much I thought I’d die. I’d prayed for a daughter, but in labor my only prayer was: “Let it be over!”  In time (too much I thought) my daughter was born. One look at her squished-up face, her perfect wee head nearly swallowed by a mop of black hair, and hearing her voluminous howl, opened my own heart forever—and ever.

I also felt anxious. I was even scared her small arm would break when I put the little undershirt over her head. My OB said: “They’re not as fragile as they look. You’ll be fine.” I was of course in love with him, or in thrall of what he did—forgetting to give myself any credit for enduring a long drug-free labor. All I felt was embarrassment because I'd thrown up all over my poor husband, standing anxiously by. I recall lamenting my intestinal expectoration because it landed all over the great sweater I had knit for him all by myself. You think weird thoughts when you’re in pain.

And I worried. Could I do this? Could I be a good mother? To these natural questions there is only one answer: NO. I’m not cynical. I’m just realistic about the vulnerabilities of parenting, especially for mothers, many of whom, at least in my generation, were handed a list of requirements for this job—omnipresence, omnipotent lovingness, and possible omniscience—qualities traditionally attributed to God, ironically called “Father.” Even my mother told me: “Being a mother is the highest destiny for any woman.”

None of my stress was, or is, my fault, or Bev’s. It’s just how it was, and still continues to be, for many mothers and daughters. I listen to mothers struggling to balance their own needs, their vocations/careers with being a a mother. I recall once a woman priest in a group say: “Well, that’s it! I simply can not be a good mother and a good priest at the same time.”

Still, Bev grew up and so did I. We have grown up together. Our hearts have opened and closed and opened again to each other through the years. We stitch it up with understanding and forgiveness and move on—because we both are open-hearted, both mothers to two daughters, both passionate about social justice, both tell the truth in love.

Happy Birthday, my beloved daughter. You are a blessing and I love you.