When I was a little girl I adored this poem. I still do. It feels like year-round, summer-like, whimsical nonsense that makes great sense for no good reason whatsoever.

Logically, I would have queried without ceasing about what a runcible spoon was, but I have no memory of getting stuck on “runcibility,” having figured that it was just a special spoon that we didn’t happen to have in our kitchen drawer. I looked. Besides, why would we, we were not owls or pussycats? [Clever silversmiths through the centuries have indeed designed made-up runcible spoons.]

Early on, my ginormous imagination, aided by expansive curiosity and self-help investigation, swallowed things whole or made them fit into my life’s schematic, including the outrageous idea of God. My mind was logically nonsensical. Still is. This can be a dangerous modus operandi, of course, but it can also be fun, and for me at least, it didn’t crush my soul, but gave me God along with many other wondrous mysteries.

I’m sure the poet Edward Lear must have had a logically nonsensical mind like mine, although here he looks more eccentric, as one might expect of a proper Englishman born in 1812, than whimsical. 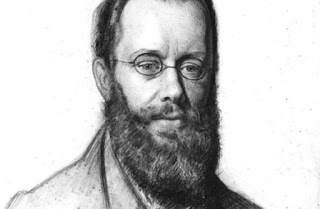 Lear was the penultimate of 21 children, raised by his eldest sister Ann, 21 years his senior, after the post-Napoleonic war and the resultant collapse of the family business. As if that weren’t enough to douse a soul, Lear suffered from epileptic seizures, bronchitis and asthma, partial blindness, depression he called “the Morbids,” and the pains and pangs of unrequited affections in attractions to both sexes. Still, or therefore, he made stuff up, and called his writings and illustrations: "nonsense literature for children." I was charmed as a child. I remain so as an adult.

Can’t you just picture the dancing duo off to a honeymoon by moonlight in a pea-green boat with honey and money and quince and mince, and a ring to seal the deal—forever and ever amen? 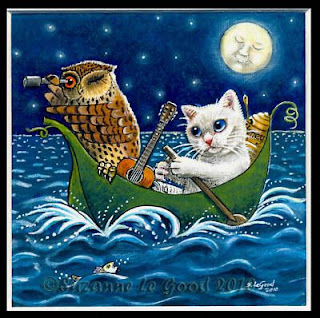 All this whimsy might augur a mystical moment, prescient of my early ascent toward sainthood. OR it might simply be the beginning of my slide into a deliciously runcible dementia.