The poet employs her quatrain form, not for a simple song of praise, but to assert a balance of power, a delicate exchange of breath for Life: God-in-Soul/Soul-in God.

Perhaps it's significant that this is one of the last poems Emily Brontë wrote before the creative upsurge of Wuthering Heights, her only and great novel, published in 1847. In her poem she is praising an immortal deity, while preparing for her own immortal life as a writer. 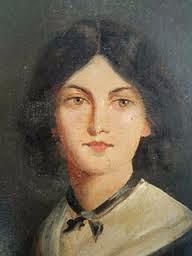 It's said that Emily Dickinson chose this poem to be read at her funeral. It's a pleasing thought. Emily Brontë had a good deal in common with a sister poet, Emily Dickinson: their solitude and independence, their hymn-like metres, the pointed use of the m-dash—like this—and of course language as brisk and crystalline as a surgeon’s cut. Both women thought big on a miniature scale.

The poem is as bold as its title suggests. I love the massing of verbs for the Spirit: animate, pervade, brood, change, sustain, dissolve, create, and rear. Such a résumé!

We live now, according to the ancient desert sages, in the era of the Spirit’s dominance; that is, a time when we awaken to and recognize the presence and work of God Spirit. God Creator and God Christ enjoyed each a thousand. Now we notice and study pneumatology with more care.

Pneumatology is the study of God Spirit. It’s amazing what we have attributed to the first two persons of the Trinity that is likely the work of Person #3.  One obvious example is how different cultures creatively appropriate religion to fit their languages, customs and circumstances. Think Spirituals or hispanic devotions to Mary. Is Jesus God son or Mary’s itty-bitty baby? Both, no? We say these are interpretive distortions, but scholars wonder if these are the work of God Spirit.

Brontë’s verbs “creates” and “rears” are parental terms. Perhaps the poet is suggesting that her deity is motherly as well as fatherly, enfolding the qualities of the mother she had lost in early childhood into the Godhead.

Poets like Emily Brontё, under-mothered, under-schooled, make their own nurturance. This poem is honest and brave and brimming with life. For someone so closely acquainted with death and loss she is terrifyingly on the side of life.

O God within my breast,
Almighty, ever-present Deity!
Life - that in me hast rest,
As I - Undying Life- have power in Thee!

Vain are the thousand creeds
That move men's hearts, unutterably vain;
Worthless as withered weeds
Or idlest froth amid the boundless main,

To waken doubt in one
Holding so fast by Thine infinity;
So surely anchored on
The steadfast rock of immortality.

Though Earth and moon were gone,
And suns and universes ceased to be,
And Thou wert left alone,
Every Existence would exist in Thee.

There is not room for Death,
Nor atom that his might could render void:
Thou - Thou art Being and Breath,
And what Thou art may never be destroyed.
Posted by Lyn G. Brakeman at 8:00 AM 2 comments: