The Pentecost beat goes on—and on, longest season of the church year. It’s Hers, the Holy Spirit's—all of it. (The Nicene Creed was written using the pronoun “he” for the Spirit, but revisions have toppled this unappealing three-men-on-top arrangement—to the good of humanity and divinity.)

I wrote a book about this Spirit back in 2001: The God Between Us: A Spirituality of Relationships. The God Between is energy, alive and vibrant in the spaces between us, relational spaces we imagine to be empty but which are really crackling with divine connective energy, pulling for healing and wholeness in a relationship or set of relationships. 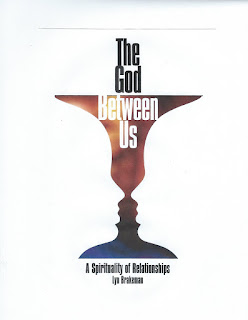 GBU was published by Augsburg in 2001 and contains midrashim: stories about all kinds of relationships in the Bible—mother/daughter: Herodias and her dancing daughter, Salome, two close men: David and Jonathan, friends: Queen Esther and a palace eunuch, Adam and Eve, and my favorite story of all, “Idle Tale”: about the group of women who come at dawn to the tomb where Jesus has been buried. They come to anoint his body for burial.

Now you don’t imagine that all these women were silent, do you? They were women. They talked!—with humor and varying perspectives, about how they will  get into the tomb, and further, how they will convince the men about the truth of what God has revealed to them—mere women, Godde help them. She does.

The principal character of the Bible isn’t God or humanity, it’s their relationship. They fall in love, they break up, they come back together. That’s the biblical pattern.
When couples came to see me for counseling, they usually arrived, each with a sharp, invisible finger pointed at the other: J’accuse! I listened to all the flak, trying not to take sides—not so easy. I could usually tell which relationships were going to make it, and they were not always the ones in which both people reiterated, “We love each other.” There was always a BUT, either before or after the love. Its volume and size told me how much work we all had to do to find the buried “love.” It was spade work.

As soon as I could, I told the couple that neither one of them was the client here. This was a show stopper. I told them that the client was their relationship—wounded and in need of healing.  The deal was that we all would work together on it. We made playful metaphors of their relationship. What did it look like?  Some relationships were suffering from too much distance—malnourished, a starving child. Others looked like roadkill, beaten down and bleeding because too much anger and blame was dumped upon them all the time. Some were simply lop-sided:one side deflated as if one person had stopped holding up their end—flat tire. Both people let go: orphaned.

It helped if the couple had a sense of humor. It also helped if they were willing to pray for their relationship, rather than simply for self or other to change, i.e. be more this or that—or less.

My book is out of print, but my idea is not dead. Recently, I was thrilled to see it repackaged by no less than an Oxford scholar, John Hare, theology professor at Yale, in an essay: “The Third Life: The Life that is Between Us.” He wrote about unity in Christ and cited a John Donne (17th century metaphysical poet) poem called “Ecstasy”  in which love with one another interinanimates two souls. Now that’s no typo; it’s my type of word.

Hare writes: “The central idea here lies in this word which Donne made up, ‘interinanimates,’ which means, ‘puts a soul, or anima, into, in, the space between, inter, two people, inter-in-animates, so that there is not just my life and your life but the life that is between us, and this third life is stronger, abler than either of our lives on its own.” (Italics mine)

I was delighted to see my God Between again—reincarnated and clothed with a grand new word: interinanimator.  My couples would cringe at such abstraction, of course. They would say that their therapist had gone nuts. They would be right, and we would have a hearty interinanimating laugh together—thanks to the God Between Us.