“The pain passes, but the beauty remains.” Pierre-August Renoir (1841-1919), the great painter in the early impressionist movement, said this to his assistants as he instructed them to finish his last sculptures in 1913. By then Renior was severely crippled with arthritis. He'd kept on painting through it all. Such passion reminds me of an organization I choose to fund in small regular ways: Foot and Mouth Artists. Despite the ugly pain of paralysis, these artists create significant beauty, holding brushes between their toes and teeth.

There is death in life, before biological death. Can death be beautiful I wonder? Can beauty contain elements of death?  Many great artists paint, write, dance, or sing painful death scenes, like crucifixion. The art alone evokes beautiful feelings. I mean feelings profound enough to move one to the soul's core—of love, sorrow, even anger and fright, or deep joy. Sometimes, memory and awareness, changes of heart, and healing come out of death’s beauty. It is the beauty that remains.

When my sister Jeanie died at 34 after surgery for the removal of brain aneurysms, it was painful, and so unnatural as to be free of pain—almost. Though I shed tears, I couldn’t cry for a while, because I couldn’t believe this had happened. Jeanie was too young to die. She was the mother of three young children, my little sister, and a sweet soul I never knew well enough, and now could not remember well. The photo, taken not long before she died, of Jeanie with her husband Don and the children— Chris, 9 and Kellie and Michael, twins about 6—hangs on my bedroom wall. I see it every morning as I get up. 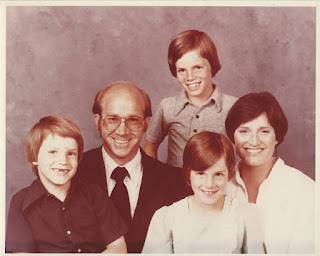 When this death intersected my life, I tried to think it through. Thinking accomplished a lot to contain raw feeling, but it did not, could not, forgive. Forgiveness, I thought, would help me move on. I thought of forgiveness not as a moral issue, but as spiritual path to new life in the middle of  unforgivable death—not resurrection for Jeanie, who I thought was just fine now, but for myself. I didn’t think I had to forgive God, though at times I hated Jeanie for dying before I could get to know her better. With every death, I guess, one must forgive the utter failure of life, and beauty, and theology, and everything you thought mattered enough to die for, to console.  I searched for Godde, for some beauty to hang onto till the pain passed.

I also had to forgive well-meaning sympathizers who said dumb clichés, such as: “The good die young.” What trash! Worse: “God meant this for a reason.”  Or, “This too will pass.” True, but so damn what? Yes, I did search diligently for a reason. At first I blamed Oklahoma, where Jeanie and her family lived, descending into desperate and shameless Eastern elitism.

There was, it turned out, a medical reason: aneurysms at the base of her brain which, despite symptoms and many medical consultations over the years, were never diagnosed until it was time for emergency surgery. Too late. The surgery was “successful,” but Jeanie never woke up. “Cause of death: respiratory failure.” So said the death certificate.

The oddest experience opened a small space for my broken heart, my memories, and my grief, and, very strangely, a consoling mix of pain and beauty. My father, my living sister Laurie, and I went to a local church to pray at the approximate hour Jeanie was being cremated. It was my idea but I don't know why I thought of it. We didn’t talk much about our reasons or about why we each thought this was important, more important than the public funeral to come. My mother had chosen not to join us for reasons known only to her. So we three went. We just sat there together in our separate silences in a dimly lit sanctuary—a church but a church unadorned, barren.

Do you know how impossible it is to imagine the whole body of someone you’ve loved being thrown into a fiery furnace and burned up? A crematory is a furnace that combusts at temperatures as high as 2100 degrees Fahrenheit. It takes from seventy to two hundred minutes, depending on the weight of the body. Jeanie’s wouldn’t take that long. I winced, thinking how much the fire would hurt my dead sister. Oh God. The biblical story about Daniel and his three friends being thrown into the fiery furnace for refusing to worship the emperor instead of their God popped into my mind. God showed up in the furnace and the three men emerged, as unburned as the soles of firewalkers’ feet. The story was true myth—no facts but lots of truth. Would God be there for Jeanie now? What would God look like, ablaze with flame-tongues, yet unconsumed?  We three sat side by side on the hard pew in the stone chapel. I didn’t look to see if Daddy or Laurie was crying. I hunched up tight, put my hands between my thighs to warm them, and hoped.
Posted by Lyn G. Brakeman at 1:40 PM No comments: