In the pre-Nicene period of Christian history, the times were much like our own. Christians were tense, fearful, still grasping for theological meaning a couple hundred years after their painful loss of Jesus Christ and their own messianic expectations. They were groping to understand, to right themselves. Resurrection was not an instant and obvious solace for many, its meaning uncertain. They shared a simple meal—over and over, as they had with Jesus.

Later a Creed would emerge. The Nicene Creed (325 C.E.) stabilized them, for better or worse. It’s always good to have something to recite in public, in community, whether you swallow every word whole or not.

On election eve, 2016, at 11 p.m., I went to bed, mildly, not wildly, confident that Hillary Clinton would be our next president, our first woman president. I slept. I awoke at 7. Dick was sitting up on his side of the bed. I knew he was reading the news on his tablet. I knew. I knew Donald Trump had been elected, because Dick did not turn to me with his big irresistible grin.

I got up slowly and went to the window, a lookout point from our third floor. I saw a familiar sight: an elderly couple of Asian extraction with their equally aging large dog. They were walking—slowly, very slowly—all three apace. The couple held hands. That’s all. Only then did I cry—for Hillary, for myself, for women, and for all people I love, and many I have never met, whose rights might be endangered, for American diversity, not to mention the glass ceiling I’d hoped would be shattered at last. And I wept for my country, which had elected a man whose rhetoric was misogynistic, abusive, and inciting of violence. Not my guy.

My mind, odd as it can be, went to the Eucharist—steady, sturdy, usually on time, a foxhole as well as a cathedral ritual of radical intimacy, inclusivity, hospitality, and hope. All the things Mr.Trump had trumpeted against.

We, like our forebears, return first to the Eucharist, remembering its power—power to which we bring, like they did, all our hopes, dreams, prayers, sorrows and joys.

Gratefully, Dick and I were scheduled to preside at a Eucharist for a small Education for Ministry (EfM) group at our parish church that evening. They were using one of the Church’s earliest Eucharistic liturgies—pre-Nicene in fact. It was brief, humble, unelaborated, contained all the traditional ingredients. Together this small group broke honest-to-goodness sweet-smelling bakery bread and shared wine from a chalice. These basic elements of nourishment for body and soul were consecrated by words spoken by a presiding priest, and equally by the presence of each of us around the altar table. Then we ate, including olives and cheese, which the early Christians would have brought to the table. We do what Christians do.

I was at peace and slept well that night. My calm did not last, of course, as the fullness of the shock settled into my bones. I talked with friends and family. My son wondered what he could say to his young son and daughter. I felt in a haze. I turned to prayer, asking God for a word—say something!! In quiet, and even in anxiety, I heard this: Don’t stand out. Stand up. It’s one of those things God often says inside me that is wiser than any words of my own.

In fact, I have been trying to “stand out” a bit as I work to promote my new book, a memoir. There is nothing wrong with that, of course, but I hear God calling me to stand up. Stand up and be counted. Keep on working for  justice and equality for women and for all the progressive values you cherish. Stand up, anyway. Even in my incredulity and my grief, I can stand up.

I turned to Scripture, needing just one more leg to stand on. I opened my small bedside table Bible and thumbed aimlessly through. This image fell out. I looked for a long time at the faces of these two disciples of Jesus, Peter and John, as they are pictured by artist Burnand—running, running, running toward the tomb, just in case what the women had reported about the missing corpse might be true.

I stared at these faces for some time. They mirrored exactly my own post-election feelings. What has happened? What can happen? What now? I might not run so well, but I can still stand up—for common goodness and common good. 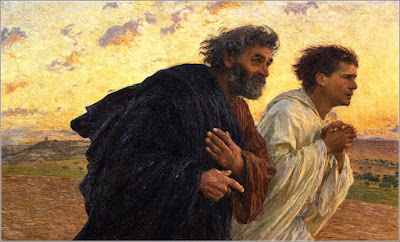