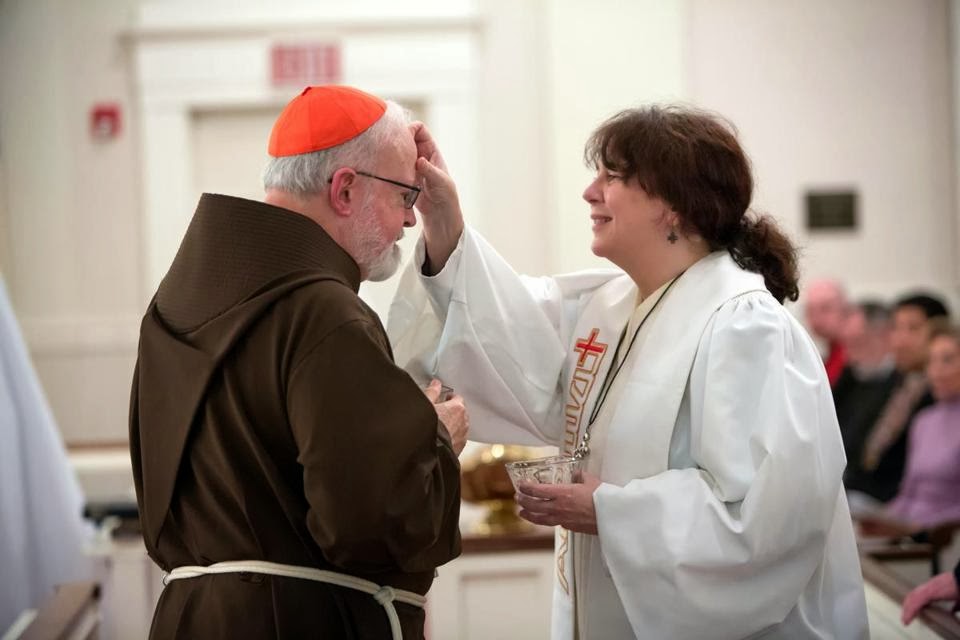 Here is one little photo that appeared in the Boston Globe’s Metro section on January 17th. It should have been on the front page. Maybe it wasn’t because there is something “wrong” with this picture.

It pictures the Rev. Anne Robertson, United Methodist clergywoman and the executive Director of the Massachusetts Bible Society, making the Christian sign of the cross on the forehead of Boston’s Cardinal Sean O’Malley, anointing him with consecrated water and saying traditional words: “Remember your baptism and be grateful.”

This is not the expected order of things.

At the parish where I was Priest Associate in Gloucester, MA. there was consecrated holy water in the font as you entered the church and we dipped our fingers into it, blessed ourselves with the sign of the cross, and murmured, or said aloud, “Lyn, remember your baptism.”  It was a customary gesture, not unusual. We did it to renew a faith commitment, often very difficult to keep. I used to love to see children clamor to be lifted up to the font so they too could stick their small fingers into the water and joyfully giggling make the sign—all over themselves.

This little photo shows such a usual ritual—unusually administered. Would a Protestant  clergywoman be tracing the sign of the cross on the forehead of a Roman Catholic friar and cardinal, “Prince of the Church?”

Yet here it is in living color. It's so darn Christian. I mean if you really follow Jesus you have to speak out wherever you see injustice, greed, cruelty and other inhuman behaviors. You also have to be kind of crazy and bust through walls of rigid rules, especially patriarchal ones. This is what I see here.

The photo was taken at an ecumenical service at a Sudbury Methodist Church last Sunday at which O’Malley had been invited to preach in order to commemorate the 50th anniversary of Cardinal Richard Cushing’s visit to the same church to promote Christian unity. The drill was that O’Malley would dip his thumb into the consecrated water and say the words to Anne Robertson who would then take the bowl of water from him and go to offer the ritual gesture to the others present.

But O’Malley didn’t follow instructions. He anointed Robertson then gave her the bowl inviting her to do the same for him. It was a powerful expression of shared Christian identity. Nothing in his gesture violated Roman Catholic teachings, yet the image speaks volumes about change.

Much of the change Jesus stimulated he did with his body. He went places he wasn’t supposed to go, healed people he wasn’t expected to heal, dined with people who were outcasts, and invited women to follow him and be apostles of the gospel.  Scandal—2000+ years ago and today. Women’s ministries are still not fully accepted in roles and places of authority in the Christian church. And women's ordination remains against the law for Roman Catholics.

O’Malley didn’t perform a sacrament, yet he made this familiar ritual mutual.  He broke rank with expectations—the man, the priest, the father, the holy father, the hierarch—received from a woman that which he was supposed to give to her, not vice versa. The Cardinal gave her pride of place and she gave him the touch of a woman. Robertson was moved to tears by the unexpected gesture. See her blog at annerobertson.org for more in her own words.

Extremists have weighed in of course. Those opposed call this gesture “heresy,” “disgrace,” and a repudiation of the sanctity of Holy Orders. O’Malley didn’t ordain Robertson. She’s already ordained and he gave that status respect. At the other extreme, some have downplayed the gesture calling it one of “courtesy," a simple exchange of blessing. Ho hum. Yes, and more.

The photo of course has gone viral. It’s news and I hope good news. No, not an official priestly gesture, yet an outer sign of an inner grace, perhaps an icon, a window through which we can glimpse divinity, dare I say Godde's will?

To me, what the camera’s eye reveals is prophetic, a visual that simultaneously foretells the future of the Christian church—and advocates for that future.