I’m recently home from Holy Cross Monastery in West Park, NY where Dick and I led a retreat on my pet passion and peeve: the inadequacy of theological language as we use it to define—confine—the image of God.

Attendance was dismally small (6) and the participants were all superbly introverted. No one disagreed with the language inadequacy issue though. So what’s not to like? Nothing!

After the second day we felt discouraged however, because the solution that presented itself as the most attractive to resolve disgruntlement with a sexist institution was to jump ship ie. leave the church. Negativity was up and tolerance was weak. Most felt conflicted.

We had provided some resources and some explanations. It was clear that everyone had come to this retreat seeking hope. No one wanted to “throw the baby out with the bath water.”

The question loomed large: What is the “baby” you do not want to throw out?

The morning of the final day of retreat and our last group meeting, I woke up, turned to Dick and announced: “It’s a bomb!”  He replied: “Let me wake up first, for god’s sake.”

Just like the biblical Jacob, lying on his stone pillow dreaming of hope, restless, and later engaging in a wrestling match in the dark with the invisible “man-angel” in whom he recognized God, our retreatants wrestled through the night.  Each one lost sleep. Each one seriously contended with her or his doubts and sought right words.

Isn’t this how it happened for the early Christ-followers?

A whole lot of wrestling with theological concepts and finding the best words to make them intelligible to the average faith-seeker, was the rule of the day for the early Church as it struggled to get established, even institutionalized. Even people on the street and in markets were wondering and gossiping about the nature of Christ. Imagine!! Everyone felt desire. Everyone groped for clarity. Is it really so different today?

Faith happens in the dark.

In the morning our group met for our last time. One member had to leave to be with her sick husband. I was prepared to throw more consoling crap around. Instead we listened—and probably threw out a few prayers like yikes and help.

Someone arose early and wrote—in purple— on our newsprint:

“The glory of God is the human person fully alive!!”

Irenaeus of Lyons, a bishop of the church, had said this. A trip to the library revealed that Irenaeus said this in the second century, not the 13th, as this person supposed. “That long ago he summed up what we are saying in this retreat.”

Someone else snuck down to the fruit baskets in the night to get a banana for nourishment before sitting down to wrestle with the Nicene Creed. By morning a personal creed had been written. “At least I know exactly what I believe!”  This kind of activity gives one a strong spiritual anchor to overcome temptations to obsess about things one does not believe any more.

Another retreatant went to the official Episcopal Church website and discovered, with amazement, that the institution she found so offensively sexist was actually wrestling with the same issues as we were. "The institution cares about what I care about."

And one remembered words a cursillo friend once said: “Look into my eyes so I can see Christ in yours.” These unforgettable words came from someone whose Christian language system was so utterly different it threatened to interfere with the relationship. “Our language is so different, yet I knew he really cared about me.”

There were no clichés, no blue ribbon packaged solutions, no perfect clarity, just openings. Wow!

The Spirit came through and gave birth to some “babies” for these night wrestlers. It made us both very happy. See? 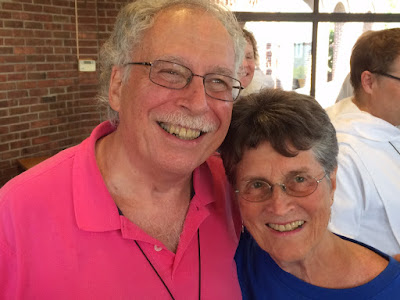