Children take their political and religious cues from their parents, at least in the beginning. Whatever we do as adults affects our children. It forms them for good or ill. And there is hope whenever children remember. A couple of tender stories to remember.

In a class of four and five year olds

Cathy and her friend Susie had a conversation in school about the election of Donald Trump to serve as our next president. Another friend, Mimi, joined the conversation. Mimi informed her friends that Donald Trump thinks it’s okay to touch “women’s private parts". Cathy said her feelings would be hurt if that happened to her or her friends and is glad she lives in Massachusetts, since he will live in Washington,which is far away. The teacher handled it well, reassuringly, and also reported it to the parents of these girls.

In a parish church, Episcopal, in northeast Massachusetts

The parish rector, a woman, told me this story: A new family, parents with their young daughter, attended church the Sunday after the election. The rector went over to greet the newcomers, thinking they looked a little red-necked. She welcomed them then asked them how they found the parish. To the rector’s astonishment, the woman burst into tears, through which she said: “I looked online to find an Episcopal church that had a woman minister and found you. I wanted my daughter to have a female role model.” The rector was ashamed of her own assumptions, astounded at the woman’s candor, and honored to be a role model for the little girl.

In the woods in Chappaqua, New York

Here is a widely circulated image on Facebook by Margot Gurster. The text quoted below the photo is from an article in The Guardian by Tina Brown, former editor of The New Yorker. 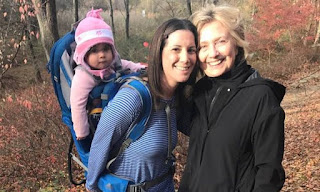 “The  snap on Facebook was taken on the hiking trails surrounding Chappaqua by Margot Gerster, a grieving Hillary supporter who was out walking with her little girls. Suddenly, she wrote, there was the sound of rustling. Then, appearing like a mirage in the clearing, was Hillary herself with Bill and their dogs, doing ‘exactly the same thing’ as Gerster. The former president obliged Gerster by taking the photograph after she and Hillary had exchanged “a few sweet pleasantries” and hugged.

Nothing I have seen in the last 15 months of the campaign has resonated with me as much as the image that Gerster posted. It shows Hillary wearing what looks like no make-up, her hair uncoiffed, dressed in a baggy black parka, brown leggings and boots, and holding the dog leash twisted in her hand as her poodle mix snuffles among the carpet of leaves at her feet.”

No glamor, no glitz, no campaign—simple beauty.

Little girls will notice and remember. Little boys will notice too, yet what they notice will be different in a patriarchal culture.

Thank you, Hillary Clinton, for giving little girls a memory that will shape their consciences forever. Some will take it into political service, but wherever they take it, it will shape our future as a nation.

Thank you for risking so much to give us females yourself as a role model by which to remember that we too have voices and gifts for leadership as we desire. It has seemed to me that many white women of my generation have been so beaten down by patriarchy that they simply can not envision a woman—someone like themselves— in the White House.

My husband Dick and I have what we would call the honor of being the only grandparents, save one, of our shared twelve grandchildren, including step grandparents, ex-spouses, and in-law grandparents, to have voted for Hillary Clinton. In this we joined the majority of American voters. Still, some days I feel as if Dick and I went out on a limb and fell off our own generation.

Nevertheless, this latest new generation will remember. What it will mean to them precisely, we don’t know. But this election will mean something very significant, something way beyond who won the high office, to the future of patriarchy in our nation. Despite the pain of backlash and particular governmental policies that threaten to demolish progress our nation has made towards social wholeness and the constitutional equality we proclaim, I believe, when I look at the bigger picture, that, in this election, patriarchy has suffered a blow from which its -ism-dependent system of social organization will never recover.

This gives me hope, indefensible perhaps, but hope. For this I thank God.