IMAGES IN WORDS AND PICTURES ARE WHAT WE HAVE OF MYSTERY

Through each of these images I see the Wholeness of all living things.

ORCHIDS—with—sunlight from windows, a mural of the Holy City Jerusalem, a broken-winged angel on the left, a half-burned oil candle on the right, a dancing flame lamp unlit center front. 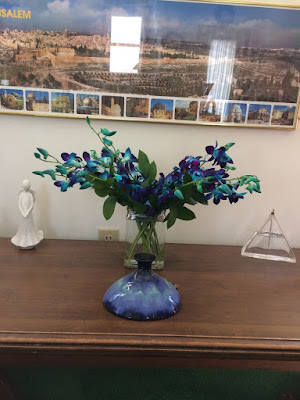 RULE OF THE ORDER OF THE HOLY CROSS, Episcopal male monastics:

LOVE MUST ACT
AS LIGHT MUST SHINE
AND FIRE MUST BURN

In the famous biblical myth of the Garden of Eden with all its wisdom about the human condition, we most often focus on the one tree whose fruit God, in all wisdom, advises against eating. It is called the Tree of the Knowledge of Good AND Evil. Its fruit, not an apple btw, is forbidden because it will bring shame and a strong temptation to doubt the goodness of in God, self and neighbors as we are. This fruit will bring shame and fear. It's the lush fruit that tastes delicious and can bear bad spiritual fruit. That simple. And we always grab for it, no? It is normal so to do. I would. I have. I will again.

BUT, there is another tree in this famous Garden of Eden. It is the Tree of Life from the beginning so placed by the Creator. It is full and rich and ample, and plenty. Its presence is almost always forgotten. We choose the other tree. It seems quite human to do so. Thank goodness we have a God who does not punish but does keep on reminding us in myriad ways, that the other tree is still there with its own fruit for us to choose—anyhow. 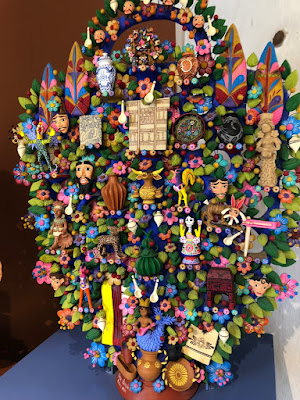 "As we move into the third millennium, we need a symbol of hope, an image that is capable of encompassing the great traditions of the past, the energy of the present and hopes for the future.
Could a woman with child be the symbol for the third millennium? For contained within her womb is all the richness of ancestral heritage, the unique, creative moment of conception and the infinite potential of the future. "

A great and wondrous sign appeared in heaven: a woman clothed with the sun, with the moon under her feet and a crown of twelve stars on her head. She was pregnant and cried out in pain as she was about to give birth.      Revelation 12:1-2

I sought for an image of the sun-woman pregnant with life and writhing in pain. All I found were images of a virginal Mary, all white, or some Russian icons, stiff of face and form.

Tiring of the hype of glory and knowing it to be only part of the promise, I thought of laboring women, pregnant with life, who then face the unfathomable sorrow when a child is born still, leaving an empty womb still vibrating with spasms of longing—and the woman alone, bedraggled, sunless, starless.

Aidan Owen, a brother at Holy Cross Monastery highlighted some words, taken in part from a poem by Christine Lore Webber, in his 2018 Easter Vigil sermon in the monastery church in the night.

"And some of us God hollows out with new life. Hollows us to be a tomb in which to lay the polar bear and the maple. Hollows us to be a bell tolling in witness to the lives of children killed while they study. Hollows us to be a throat calling out for justice, wailing in lamentation, and singing songs of hope and resistance, a throat proclaiming the great and unending alleluia of God, of life flowing from the heart of death, like the waters of Eden."


Are we not all called to be hollowed out like the tomb, even as we simultaneously long to be hallowed?