My favorite biblical story is the one about the so called prodigal son who grabs his inheritance early and splits to manage his fortune, which he squanders on loose living. It’s sort of a classic growing-up story. Ask any parent of teens.

The key line in the story is in a scene of porcine gluttony and filth in which the destitute young man feeds with the pigs. 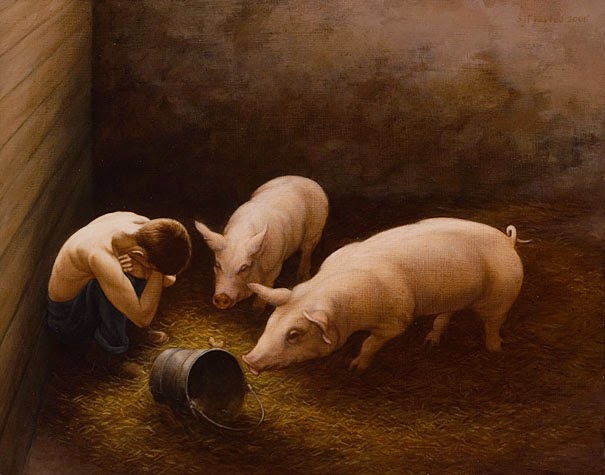 While in the sty the prodigal COMES TO HIMSELF and decides to go home, hoping against hope that his Daddy, aka Godde, will still love him. Mommy, btw, is not mentioned, so fill it in. (If I were the mother I’d have strongly advised my husband not to give sonny the inheritance in the first place.)

I’ve been prodigal myself. Once I thought I’d be ordained a priest. I thought this in my prayers and secret conversations with God. In fact, in my midlife whirlwind I thought that I could not be a woman fully realized unless I also became a priest. It wasn’t until I encountered the institutional church in the 1970s that I found out what it felt like to be a small davidic female thinking she’d take on Goliath—without five smooth stones or a slingshot. I had no inheritance to squander, but I did have a self to “come to.”

I had dashed forth too soon to manage my life and discovered I couldn’t do it alone, or at all well. I needed Godde, love, family, belonging, church community, friends, sex, seminary, grief, a divorce, and a ton of therapy in many forms. So there you have it.

The moral of this story is......  do you know who you are?  “Coming to yourself” may help you find out, and from that touchstone to go forward.

I think it’s possible for even a large institution to “come to itself,” that is, to re-member the purposes for which it stands and its core values. For the Christian church that core is love of God, self, and neighbor.

This kind of spiritual self-recognition seemed to happen at our recent convention to elect a new bishop for the diocese of Massachusetts.  There were seven candidates, all vetted and known as much as possible. 334 lay people and 298 clergy gathered to worship, sing hymns, pray, and ballot until a simple majority in each order, clergy and lay, was reached to elect. We were there from 8 a.m. to 4 p.m. There were no “hanging chads” but there was a vote count problem in the first ballot and we had to await legal recommendation about how to proceed, since the next two ballots, already processed, were declared invalid. Details can be found on the Diocese of Massachusetts website.

In addition, the retiring bishop, who has served for 20 years, is struggling with brain cancer. It was heart-breaking to see him strain to stay on track, and wonderful to see all those around him gently prompting him. Do we not truly bear each others' burdens when we can, as the Bible suggests? In this illness, the bishop’s temperament has softened and his sense of humor has taken more of a lead.  “I know all of you. I love all of you. I just can’t remember your names,” he joked.

Can you imagine there were a few loud and brash voices screaming out "It's Lent! It's Lent!" in response to the bishop’s request that we sing, "Seek ye first the kingdom of God…" a hymn with a wondrous lilting and upbuilding chorus of Alleluias. (In the season of Lent we do not say Alleluia until it reemerges strongly in Easter.) To me this objection to liturgical rule-breaking represents the worst of liturgical rigidity—and it wasn't even part of the official liturgy, only one of the hymns we sang to pass the time while we waited. The church can not afford to constrict itself unnecessarily. Remember those girdles and corsets women used to wear?? Constriction is one translation of the word sin.

Our diocese had lost its way in many respects. The center wasn’t holding, and people felt anxious and vulnerable, the weight of sorrow hanging heavy in the air. Nevertheless, our true center—Creator, Christ and Holy Spirit—held. We came to ourselves as we sang. Despite a lot of mess and error, the Holy Spirit, whom we lustily serenade and, deep down, don’t believe a word of what we say, presided.

We elected the Rev. Alan Gates from Ohio, but we voted for ourselves as a faithful community gathered in Godde’s holy name. Many will grump and grunt and be negatively-focused, mostly about stuff we already knew was in disarray, but this is my take on the soul of this day—gracious with new life coming to us as we came to ourselves. What could have been a flop leaving bitter taste turned out to be amazing grace.

Do we ever practice what we preach, we clergy types of righteousness?  We are as prodigal as anyone else, longing to succeed in the world and longing to be held like an infant—at once. 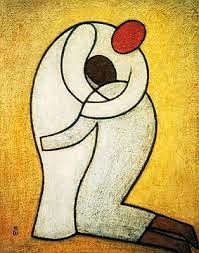