While walking in the park on a beautiful sunny day, the air as crisp as blue, I spotted a snail obstructing my path. Seriously? How could such a tiny critter arrest my attention so completely?    I’d never seen a snail, except curled up safely inside its lovely striped shell or on a restaurant plate as a delicacy. Now here was one, opened out and moving, her minuscule body stretched out in front and in back of the shell’s closure, and all her wee feet milli-inching along. I stopped to watch her journey, fascinated by attributes I admire, such as diligence and determination. Undaunted, this critter was on the move. On the move might be an exaggeration.

I called a passerby to look with me. She was amazed. She had never seen a snail on the move before.We exclaimed together while I took some photos of the snail, whom I quickly named Swifty.  I stayed for a while to watch. This was her coming-out party, I figured. I snapped another photo, gave her a little blessing, and wished her well.

Here’s Swifty herself. She is a modest soul, full of gumption and sure to be stepped on by one of the many walkers and players who sport about in the park.

Oh, my question: What is slower than a snail? Not a sloth. Well, maybe a sloth but with a different kind of slowness, more like chronic vegging—upside down.  Here is a portion of a poem:

The Three-Toed Sloth by Fleur Adcock

The three-toed sloth is the slowest creature we know
for its size. It spends its life hanging upside-down
from a branch, its baby nestling on its breast.
It never cleans itself, but lets fungus grow
on its fur. The grin it wears, like an idiot clown,
proclaims the joy of a life which is one long rest.

One cannot but envy such torpor. Its top speed,
when rushing to save its young, is a dramatic
fourteen feet per minute, in a race with fate.
The puzzle is this: how did nature breed
a race so determinedly unenergetic?
What passion ever inspired a sloth to mate?

Recent National Geographic trivia: Sloths rest 20 hours out of 24 in the day. Their metabolism is so slow they climb down to defecate only about once a week. How do they reproduce? How love?

Mark Rosenthal of Animal Magic, an animal rescue program in Michigan, made a smartphone video of two sloths actually breeding while hanging suspended from a branch in their habitat. Haltingly, Rosenthal described the scene: “The male keeps trying...the girl...is receptive... He’s going to try again...Those of you watching, bear with me—they’re sloths...”  (I forgive Rosenthal his use of “male” and “girl”instead of female. Oh Godde!)  The eventual consummation, Rosenthal relates, “was upside down. And it didn’t take very long.”

Sloths are quick when it comes to love-making. Fall over laughing.

Well, here is a possible answer to my question: the Church is an institution freighted with such an obligation to love, and such a duty to serve, and such a compulsion to be sensitive to everyone’s needs, that reform takes a very long time—a very long time, indeed. Perhaps this is the way with any institution, but religious ones take longer, in part because they are beset with the devilish question: What does God want? It is a question easily deployed to keep us stuck.

From Swifty, the snail, I learned that slow is also determined. Slow-moving devotion is a gift. Say the word, slow, slowly several times on the exhale, and you can feel yourself slowing down all over. Sometimes I move too fast.

And from the noble inverted sloth, I learned that when love is involved, with a dash of lust and procreative necessity, even the slowest creatures on earth can move very fast.

The Church of Christ is in danger of not reproducing. It values slow-moving devotion and fast-moving love—planting seeds of compassion wherever there is need, and doing it without fuss and feather. Our balance is off—too much determined devotion and too little fast-moving love for its own sake. If a sloth can quicken love, I guess we Christians can, too. 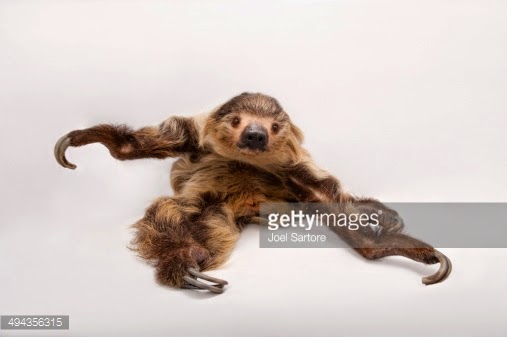