The other day I was deliberating, obsessing really, over a relatively small decision about whether to offer my opinion or let it go for fear of offending, when I heard myself say to myself, “Just faith it!”

Faith it? An immediate “Greek” chorus of English teachers chanted in my head: “Faith is a noun, dear, not a verb.” Alternatively, this might be a Spirit-nudge cutting through my mental murk—obviously not god the grammarian. But should I have faith to say what I thought or faith to shut up? I was free to choose.

And who is really free anyway? (The last word is "immigrant.")


Choice is overrated, mostly because our fat affluent culture offers so much to consume that it’s overwhelming and stressful, and partly because choices that seem free are bound by inner and outer limitations—like unconscious motivations, what your mother and Mother Church always said to do, and other people. Still, I had to choose something, and I wanted God or Jesus or the powers to tell me what to do. I had choices BUT I wasn’t free.

As reported in Bondings 2.0, June 17, 2014, by newwaysministryblog, Britain’s Cardinal Vincent Nichols addressed the Global Summit to End Sexual Violence. He highlighted war-time rape and sexual degradation as “a most fundamental denial of human dignity and a most gross breach of a person’s human rights.” Duh.

I would have stopped reading— BUT I saw the next word, which was BUT.  ("But," I knew, could cancel everything that preceded it.)  I read on: “But . . . in his speech, Nichols offered a different definition of sexuality than is usually promoted by Catholic bishops.”

After defining human sexuality as a vital component of our humanity, blah, blah, he continued: “A fundamental aspect of the Church’s teaching about sex is that sexual acts must always take place within the context of  . . .  (Yeah, yeah, we know it’s the context of Christian marriage.)

BUT, the Cardinal did not say Christian marriage, he said “authentic freedom.” Authentic freedom. For any two people?  Not just Christians?  Outside marriage?  Just for love and not just for procreation?  The moral context of sexual acts is now about freedom, according to this cardinal, and, I would add, many theologians and ethicists.  Morality unbound like Lazarus. 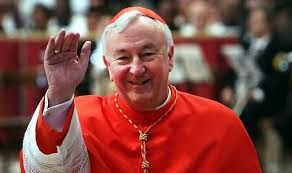 But, how did this help me? I’m not exactly sure, BUT this came to me: “authentic freedom” is spiritual freedom, faith freedom—the authentic freedom of the soul in Love, the soul in a moment without tight rules and contexts of practice, the soul at risk from without, willing to take risks from within, a soul who can faith it.

That’s how I stopped deliberating, praying, trying to fit my decision into some acceptable safe cubby.  I faithed it.

I don’t know if offense was taken or not.

Only after my faithing, did I remember the biblical wisdom in Galatians 5:1 :"It is for freedom that Christ has set us free."  It doesn’t say choice; it does imply faith.

P.S. did you know there is a car named SOUL? A Kia. KIA means "killed in action." Ill let you interpret that any according to your mood or your spirituality.  BUT I doubt if this little car authentically free.