Maybe someone comes to the door and says,
"Repent," and you say, "Come on in," and it's
Jesus. That's when all you ever did, or said,
or even thought, suddenly wakes up again and
sings out, "I'm still here," and you know it's true.
You just shiver alive and are left standing
there suddenly brought to account: saved.

Except, maybe that someone says, "I've got a deal
for you." And you listen because that's how
you're trained––they told you, "Always hear both sides."
So then the slick voice can sell you anything, even
Hell, which is what you're getting by listening.
Well, what should you do? I'd say always go to
the door; yes, but keep the screen locked. Then,
while you hold the Bible in one hand, lean forward
and say carefully, “Jesus?”


A friend of mine, some years ago, opened his door on a Sunday morning to face a young man standing there holding up a Bible and his pointer finger, saying: “Repent!” My friend was suffering the pain of a serious hangover and was horrified. He slammed the door in the man’s face, and then made jokes about it for a few years, most of them mocking this stupid Bible-thumper. In time, my friend did “repent” in the way he needed to. He stopped drinking and joined AA.

The poet who wrote about Easter morning is William Stafford (1914-1993). He was poet laureate of both Oregon and the United States. He wrote relentlessly honest notes, in part gleaned from his own experience as a conscientious objector in WWII. During that war, Stafford worked in Civilian Public Service camps in several states. He wrote and spoke quietly about the sanity of nonviolence and the madness of violence. He did not fight for the sake of his country, as everyone thought was the highest value. He chose not to fight—for the sake of his country. 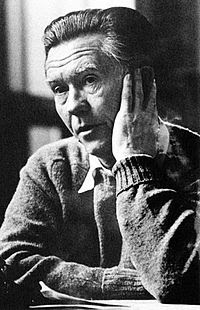 Personally, I think the choice NOT to fight for the sake of his country was a courageous one. What could happen if everyone in the world chose likewise? Seems like kind of an Easter choice to me.

Who knows how and when, or exactly why, our choices are made? Yet make them we do. In the Book of Deuteronomy the voice of God speaks to the people of Israel, saying: “See, I have set before you life and death, blessings and curses. Choose life so that you and your descendants may live. . . ” (30:19)  I often remind myself: Choose life!

Every small choice, for better or worse, counts. Here’s one………

The Squirrel
by Brian Doyle

Here you go. Here’s a moment to ponder carefully.
We think that there are greater and lesser moments
But how immensely and ridiculously wrong this is.
For here is a boy riding along the street in summer.
He is perhaps six years old. His bike is wildly blue.
He sees a smear of squirrel in the street. He pauses,
Using the heels of his sneakers as brakes. He looks,
He dismounts, he sets his kickstand, he looks down.
He kneels and gathers up the shredded creature and
Walks to the shady ravine where we saw the coyote
That time and he gives the squirrel to the tiny creek.
He washes in a muddy puddle and then he rides off.
I am the man who saw and testifieth of these things,
And what I say is true. I saw a boy bow before holy
Things, for all things are holy, and he reminded me,
And so now I remind you. Go thou and do likewise.