The W.A.S.P. pedigree in the 1950s had served as almost a degree, or decree, of admittance into elite white Protestant society. It also became a required credential by which debutantes and their proposed escorts would be, in Scarsdale and many other cities and towns, screened for The Holly Ball for debutantes, inaugurated in 1953, the year George Kempsell was installed as rector of St. James the Less.

As I write this I remember with a shiver how my mother practically forced me to be a debutante. It was the worst kind of social snobbism imaginable. I was deeply embarrassed at eighteen and remain so. Nevertheless I was announced and escorted on my father’s arm—coming out into what? Society, but whose society?

George Kempsell had ignited a simmering cauldron of wealth, white privilege, fear, and the age old habit of taking righteous shelter in privatism: the autonomy of a private club to make its own rules. Kempsell’s appeal to a higher authority held little sway against the  dominant social class ideology. Although some supported his position, a position about which he and the parish, ironically, received much public attention, even nationally, forces combined to create a “perfect storm” anyway: Kempsell had the power and the duty to excommunicate those who did not repent in response to his charge of bigotry, and they had the power to withdraw their money and leave the parish. The impasse was unresolvable, and the damage was done. The stigma of bigotry and prejudice associated with Scarsdale left scars, perhaps not entirely deserved, and Kempsell was forced out. The stormy scandal only stayed hot for a time, but it made its mark. Some few in the club today still harbor bitterness about the Kempsell scandal.

Kempsell went from giving celebrity-like speeches, sent by the Episcopal Diocese, to receiving death threats, being removed from his home by the FBI, and being silenced. He bought a guard dog. He was a broken man, though not defeated. He tendered his resignation in January, 1963, the month and year my oldest daughter was born and I received a Masters degree, both of which, slaked my thirst for pursuing a church career path of my own—for now.

The Scarsdale parish raised money to facilitate the Kempsell family’s move to Dallas, Texas, to a parish that proved inhospitable to his progressive ideas for different reasons. Finally, Kempsell went to a small rural church in Arvada, Colorado, where he stayed true to his prophetic ideals, provided pastoral care, and was beloved by many. I found no repentance stats for the accused. Here is the only small photo I found of Kempsell—baptizing an infant, I think in the Scarsdale parish. 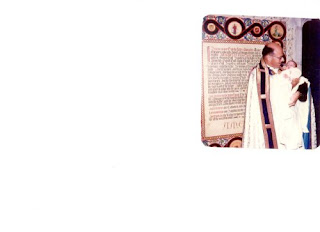 Would I have repented? Probably not. I was a grudging grouchy debutante, yes, but I was surely glad no fiery preacher had blasted my parents’ country club and held my feet to the fire.  Risky grace would require too much of me—right now.

Dick Simeone also did not think women’s ordination as priests was right. Many male Episcopal priests feared the loss of their clerical collegiality and authority, or more precisely, the sharing of such a long-held patriarchal privilege. He valued his patriarchal status, even though he felt some discomfort. Things happen when one faces formative influences that don’t sync with one’s true character.

Dick first met me when he interviewed for the position of rector at my home parish.  I was on the parish search committee, and was also a female aspirant to the priesthood. I asked him directly about his position on the matter. He gave a long, complicated, homiletic answer, amply justifying the theological and ecclesial rationale for women priests, then grinned: “I’m in favor of women priests.”  Good thing. I, by now more ready for risky grace, would have fiercely protested his election as our rector.

Kempsell, possibly under the influence of Ruth, his beloved wife of over thirty years, had also admitted: “I was wrong about women's ordination.” Although thin and frail, he traveled to New York and stood for his niece at her ordination.

Kempsell died on August 31, 1980, on the thirteenth birthday of my oldest son, just one year and five months after the death of my youngest sister, two and a half weeks after my own forty-second birthday, in the midst of the painful time of separation before inevitable divorce, and eight months after Dick assumed the rectorship of my home parish. I’d clung feverishly to my desire to be a priest, even after I’d been turned down twice. Would I risk it again? When Dick came he brought his powerful confidence in me with him and told me Kempsell’s story. I knew, without knowing, that I would risk trying it again. If Kempsell could risk fighting for his vision in Scarsdale, I could risk fighting for mine in Connecticut.

Kempsell’s memorial service at the Episcopal Cathedral in Denver was packed, so full that people were standing in the aisles—testimony to this small dynamic man’s courage, his insistence that everyone be treated equally, regardless of race, creed, color, or gender.

I was ordained priest in 1988 at the parish church where Dick was rector, my husband of two years, and the preacher for the day. The small church was full and adorned with roses—scents of a woman. The ordaining bishop had a serious head cold. Both roses and sneezes were fitting tributes to lots of determination and challenge on my part and the somewhat grudging willingness of an institution to comply. I pronounced the final blessing in the name of the Father, the Son and the Holy Spirit—imbalanced gendered language, but for that day, okay.
* * * * * *
The Kempsell story happened in the 1960s when civil rights was heating up and racial fears steaming. Lurking beneath racism in America, even then, was classism, waiting in the wings to assert its dominance. Now, over fifty years after Scarsdale and the Civil Rights movement, classism is virulent enough to make sure that the elimination of other -isms, such as racism and sexism, remains unattainable. The election and ascendancy of our current president is not the cause but rather the result of this lingering prejudice—a move away from the values of our democracy, not to mention the values of Jesus the Christ or George Kempsell.

We, in Church and State, need more George Kempsells—people with courage or grit enough to stand up to excesses of populism, aka mob power, traditionalism, another -ism grown rigid, and recalcitrant defining classism.

Kempsell stood for equality. He was fond of saying, “There’s no such thing as a second-class Christian.”  True, and thank you, George Kempsell.

(Much of the detail for this post I got from a blog post by Thomas Quirk who grew up in Scarsdale from 1953-1961 and is now a high school teacher in Lexington, Massachusetts. I am grateful for his research and his caring.)