At the 2018 General Convention of the Episcopal Church (TEC), the legislative houses passed a resolution about prayer book revision. It addresses language about God—my peeve and passion of years.  Here is the wording of the relevant resolutions:

Resolution A068 originally called for the start of a process that would lead to a fully revised prayer book in 2030. The bishops instead adopted a plan for “liturgical and prayer book revision for the future of God’s mission through the Episcopal branch of the Jesus Movement.”

The bishops’ amended resolution calls for diocesan bishops to engage worshiping communities in experimentation and creation of alternative liturgical texts that they will submit to a new Task Force on Liturgical and Prayer Book Revision to be appointed by the presiding bishop and the president of the House of Deputies.

It also says that liturgical revision will utilize inclusive and expansive language and imagery for humanity and divinity, and will incorporate understanding, appreciation and care of God’s creation.

Meanwhile, General Convention also adopted a resolution that allows all congregations in the Episcopal Church to use optional, expansive-language versions of three Rite II Eucharistic prayers in the 1979 Book of Common Prayer.

Resolution D078 provides alternative language for Prayer A, Prayer B and Prayer D. The changes are available for trial use until the completion of the next comprehensive revision of the Book of Common Prayer.

This project coordinates well with the mission strategy of the Episcopal  Diocese of Massachusetts: Embracing Brave Change.
*  *  *  *
I found TEC over fifty years ago when I was in college, thanks to the college chaplain who discerned my longing for, well, worship with chutzpah, bold enough to invite my whole body to enter in—kneel, pray standing, cross myself, move to the altar, and call out: “And with thy spirit.” TEC (our shield below) was also talking about women being ordained priests—some distant day, but they were at least wondering whether women were also called by God. 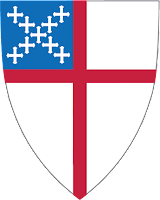 Our Book of Common Prayer, the “bible” of our worship, has an astoundingly open-ended Preface for 1789. It authorizes the church to make adjustments, abridgments, and alterations to this book in accordance with its purpose: “the edification of its people,”  and according to the exigencies of the times. There have been many revisions over time. The point is that our common prayer reflects who we are and what we believe about God and about ourselves and the Creation in which we live.

TEC will not publish a whole new prayer book, which is wise considering that paper is slowly losing its dominance in the digital age. Ah, I grieve—and shred! Still, this year’s resolution is revolutionary, because it calls for changes in theological language, that is language about God, or the image of God. Traditionally, God has been clothed in words that portray God as dominantly transcendent, excessively almighty and exclusive masculine. The image of God has been stunted, incomplete, and yup, errant.

My memoir God Is Not a Boy’s Name. Becoming Woman Becoming Priest (2016, Wipf and Stock/Cascade Books) tells the story of my fight with the patriarchal Episcopal Church to be ordained priest and my ongoing conviction that God/divinity has no gender, let alone one gender only. I have lobbied and prayed with audacious chutzpah that the wholeness of the divine image be accurately reflected in our words. (Me and two of my books.) 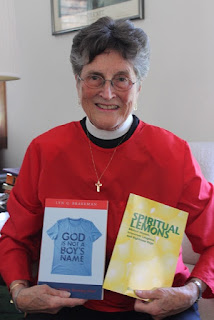 There’s an expression in the Talmud called chutzpah kelapei Shemaya, calling for boldness. Chutzpah, btw, is not Yiddish but Aramaic and is from the Babylonian Talmud. Jesus knew this spirit well. It’s all over the Bible.

I feel accompanied by influential biblical characters who had such audacity, even confronting God on occasion: Moses scolded God for giving the people too much gold—if You hadn’t done that they wouldn’t have had enough to make the idolatrous calf you got so jealous of!  Wasn’t it Moses too who smashed those sacred tablets to smithereens?  And didn’t Jesus break into the Temple, recalling it to its mission of prayer? Mother Mary’s Magnificat praises God for pulling off some major social class reversals; the woman at the well challenges Jesus’s theology; the Syrophoenician woman challenges his Jewish exceptionalism. These may be symbolic stories but they shine the harsh light of judgment on “the ways we’ve always done it” and pack a wallop, forcing us to think again as we embrace brave change.

Language is our most potent creating symbol. It must live and it must have enough chutzpah to keep us alive and awake. Thank you Episcopal Church.