I had a stunning thought just two days ago: I wonder if we should get a gun? I scared myself. My very next thought was something like: But if someone armed and with intent to kill harm or terrorize into submission broke into my house, how likely would it be that I’d be sitting there with a handgun in my pocket, or next to me on my computer desk, or on my bedside table— ready and loaded? Really! Or maybe my husband should wear a holster like a cowboy? Okay, I was humoring my fear, but honestly being armed seemed a little silly. It was the very thought of it, however, that alarmed me to chills. No, I don’t want a gun in my house. EVER!

In the 1970s, my dad bought a gun. He’d never had one before. After the Truman Capote book, In Cold Blood, came out Dad immediately went out and bought a huge shotgun. The idea that strangers could break into one’s sacred home and brutally murder all its occupants was beyond my father’s capacity to imagine, even though he knew this story to be true. His fear got the better of him. He kept the gun under his bed, at the ready. But who knew if he took instructions to operate it?

Dad was a city-bred “Mad man” just retired. I suppose the move to a semi-rural country setting with lots of land and no urban or suburban surroundings, like people and buildings, made him feel naked. I was a young mother of four living close by. But my sister was living with my parents at the time, and she was afraid of the gun. One night she wanted to go into my parents’ bathroom to get a Tylenol, or some such, and was terrified to do so for fear of being shot. My dad’s gun made us more afraid of him than of any stray killers, the likes of Leopold and Loeb. That gun changed the tenor of the house just by its presence.

I nevertheless remember that, as a child and true girl, I had a brief pre-estrogen phase of fascination with guns. My favorite show (yes, on the radio!) was the Lone Ranger. I was in love with all the cowboy heroes, like Roy Rogers and Gene Autry. I wanted to be one of them, not one of their girlfriends.  I had a horse on a stick I used to mount and gallop around our NYC apartment with my cap gun, shouting Hi Ho Silver away!! I loved the loud bang of my weapon and the smoke and the smell that came from the fired pistol. Honestly, I felt very powerful and fierce. 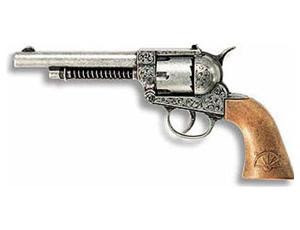 But a gun? Now? Cowboys aside, and despite the current cultural idolatry of guns and the security they represent to so many people, having a gun would not make me feel safe. I do not believe that having a gun would protect me from anything or anyone; nor do I think it is my civil right to purchase a gun. Having a gun in my home would symbolize everything I despise—yes, even organized military or religious violence. It would signal an abandonment of my spirituality, my trust in Godde, whose divinity, I believe, is implanted within all human flesh as the healing and saving power of Compassion and Hope and Peace. These were Jesus’s “weapons" and they’re good enough for me.

I want our government, specifically our paralyzed Congress, to get its act together, cross the aisles, establish a bipartisan approach again, have clear-headed conversations, and draft some reasonable legislation to regulate guns and who gets to purchase them. I don’t care if the time-bound second amendment is either radically amended or eliminated.

Sometimes when I hope and pray for peace, odd, ironic ideas slip into my mind—ideas that confuse me, amuse me—and help me practice what I preach.

Heck, I thought, Congress, and religions, have been “shooting” smoking cap guns across aisles for years. And now they argue over the control of real guns with real bullets? But what if guns can force the issues of peace onto the table, make us disarm, verbally and literally? God knows they're loud enough!