This image mesmerized me. I saw it in the Boston Globe Arts section of February 10, 2015. 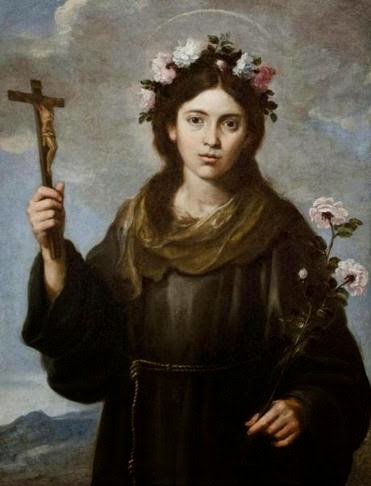 It's a painting (hanging at the Worcester Art Museum) by the Spanish artist, Bartolomé Estebán Murillo (1618-82) of thirteenth century Spanish saint Rosa of Viterbo. This child survived religious persecution, life as an orphan, and is credited with healing miracles, required in the Roman Catholic Church for sainthood, but waived by Pope Francis I for one papal saint. What counts as a miracle today?

Rosa's religious faith not only held through suffering but increased and, at 15, she tried to establish a monastery. What keeps us longing, and paradoxically trusting, a God some still hold responsible for everything, from weather to our own sins? What?

To me this painting, despite, and even because of, its realism, is like an icon through which I can see divinity. I was struck first by the utter lack of sentimentality. Then I felt beckoned by her liquid eyes. Her mouth is poised to say something. I listened. What is she saying? It's like trying to imagine what Jesus wrote in the sand just before he turned the rules of his culture upside down and saved a woman about to be stoned for adultery. He sent the angry, stone-bearing crowd packing: "Let the one who is without sin cast the first stone." Such rare wisdom holds purchase today, and for all time.

I noticed the flowers  next, and only as I was about to turn aside, did I see the crucifix. It seemed almost an aside, meant to be very much a part of the reality of human life. It was obviously something which formed this child and helped her have hope, as much as the flowers did. And now she looks out at the world to say?

(This last line from Verdi's opera, Aida, means "I pray for thy peace." It's the poignant song of a lover.  (It's opera after all!)