This photo looks just as I thought seven-year-old Scout, aka Jean Louise Finch, would look by the time she reached 88. Isn’t she beautiful? I wonder if authors who create strong characters write themselves into them, not just personality and speech, but the actual image itself. 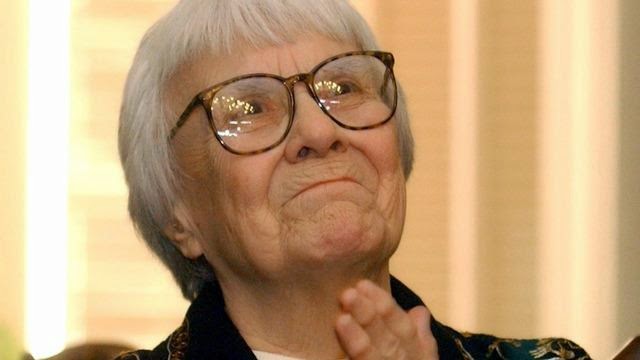 This photo is Harper Lee, the woman who is now 88 and who wrote To Kill a Mockingbird, starring a little girl named Scout. Scout grew up in Macomb, Alabama, pretty much had the run of the streets, including places she wasn’t supposed to go, like the courthouse where her Daddy, whom she called by his name, Atticus, was defending a black man against charges of raping a white woman in the 1930s.

Mockingbird, published in 1960, is one of the most beloved novels in history—right up there with the Bible and Shakespeare. Oh, and Agatha Christie, too. Lee exposed the pain of racism through the eyes of a young child who, with wide eyes and a discerning heart, questioned everything, wanting to know, and even more wanting to understand, why people behaved “not nice” to other people.

Scout was lucky to have Atticus Finch as a father— patient enough to address with candor the child’s dilemmas about race, class, mental deficiency, and human kindness. Atticus, despite his own grief at the loss of his young wife, or maybe because of it, made room for his daughter’s unformed convictions about justice to grow within the safe bounds of affection and manners.  Atticus Finch goes down in history as one of the best fathers ever.

I saw a television documentary interviewing the actors many years after they had played Atticus and Scout in the 1962 movie version of Mockingbird. Mary Badham, who played Scout as a child, said that Gregory Peck, who played Atticus, treated her in real life just as he did in the film. Nice!

The new novel, Go Set a Watchman, was written in the mid-1950s, and features Scout as an adult woman. Lee thought it “a pretty decent effort,” but her editor liked the flashbacks from Scout’s childhood so much he persuaded Lee to write the novel from the child’s point of view. “I was a first-time writer, so I did as I was told,” Lee said. She hadn’t realized the original book had survived, “so was delighted when my dear friend and lawyer Tonja Carter discovered it. After much thought and hesitation, I shared it with a handful of friends and was pleased to hear that they considered it worthy of publication. I am humbled and amazed that this will be published after all these years.”

I include the above quote from a Feb. 4 piece in the Boston Globe, because some writers are wondering whether Lee, in her advanced years, was fully aware of what was happening as she released an old and, apparently not to be edited, manuscript for publication. Many writers save all their first drafts and shrink from the idea of anyone seeing them in their naked state. Should we make sure the old stuff is shredded? It’s an issue about control of one’s own intellectual property and a valid concern for awareness.

If you can believe the quote from Lee, and I do, then would a “dear friend” act this way? And what about Lee’s own satisfaction with her first book and her recent careful considerations about the project, not to mention her “delight” at the discovery and the publication. Is 88 too old to be making such discernments?

Most all my old manuscript stuff, raw and pretty lousy, is still somewhere in my computer. I’m not famous, nor likely to be, so it’s not of much concern to me. Even if I were, though, I might just let it go and let it be. Honestly, even greed, if that is a motivator, couldn’t ruin Harper Lee’s reputation, and who could forget Scout—ever? There is something eternal in a great story that not much can tarnish.

I am eager to read the new novel and believe I will feel Harper Lee’s voice, sense the character of Scout and others, and relish being in Macomb again. Resurrections are risky. I hope this one works.

Here is my favorite quote from To Kill a Mockingbird. Atticus is speaking to Jem, Scout’s older, by a couple of years, brother.

Atticus said to Jem one day, "I’d rather you shot at tin cans in the backyard, but I know you’ll go after birds. Shoot all the blue jays you want, if you can hit ‘em, but remember it’s a sin to kill a mockingbird." That was the only time I ever heard Atticus say it was a sin to do something, and I asked Miss Maudie about it. "Your father’s right," she said. "Mockingbirds don’t do one thing except make music for us to enjoy. They don’t eat up people’s gardens, don’t nest in corn cribs, they don’t do one thing but sing their hearts out for us. That’s why it’s a sin to kill a mockingbird.”  About sums it up, huh?