I dedicate this post to all fathers, especially those in our family, who are clean and sober and a blessing, including my own dear dad, in heaven I'm sure.  Thank you. Happy Father's Day.

I also dedicate this post to the nine people who on June 17, 2015 were shot and killed in Mother Emanuel AME Church in Charleston, S.C. in a senseless act of terrorism. I don’t know if drugs were involved in this act, but I’m am beginning to believe that our American-dream culture is addicted to guns and the power they represent.


“What I am about to say will make some people angry.”

Bob Stutman, an experienced DEA (Drug Enforcement Administration) agent for over 25 years, now a consultant on the issue, said the above sentence more than once during a talk he gave recently in Boston. His warning felt almost like a threat. He was right. At almost everything he said, some heads bobbed assent and some heads swiveled negation. No one was neutral—a clear sign of the importance of this issue.

I chuckled inwardly, thinking about Paul the apostle’s preaching in Athens. Paul gave these men, and they were all men, no such warning when he harangued about this Holy One God in whom “we live and move and have our being; as even some of your poets have said.” (Acts 17:28) Some men felt angry, some hopeful, none neutral about such divine encompassment.

Do we think we can keep Divinity transcendent and conveniently far away?

Clergy were invited to attend Stutman's talk, because the current addiction crisis affects all stakeholders, and churches have a stake in the common good. I too have a stake, both personal and professional.  I grew up with alcoholism. I worked as a chaplain in an alcohol/drug rehabilitation center for six years: inpatient for 4 weeks, followed by several weeks of partial hospital aftercare. Such luxury today is costly and rare. It needs resurrection.

Why?  Addiction is of epidemic proportions; first-use age is 12, and 4th grade is the grade most at risk for recreational alcohol use; the latest killer drugs are opioids (synthetic drugs prescribed by medical doctors for pain,) and  kids get them out of the medicine chest at home, not from drug traffickers! The only thing that made me feel angry was this: WE DON’T TALK ABOUT IT. Drug addiction is a disease. Our silence is a sin.

Bullets
-Opioids, such as oxycontin, are synthetic drugs. Opiates, such as heroin, are natural drugs.
-The leading cause of death by accident, automobile accidents, is now #2, replaced by death by overdoses of pharmaceutical drugs.
-Don’t blame pharmaceutical companies and don’t blame the drugs themselves. Think regulated medical marijuana. For the biblically savvy, don’t blame the snake in Eden either! It’s us!
-Kids say things like: “Hey dude, this s..t’s gotta be safe. It was prescribed by a nice doctor for dad (or mom.) I got it from our medicine cabinet!”
-The feeling you get from an opiode is not a high, a charge. A man described it as: “being held in my mother’s arms.” Warmth and safety—primal.
-Any pharmaceutical drug is abusable. Pills get crushed. Imagine snorting all those extended release granules of a stimulant, like Adderall or Ritalin, prescribed and effective for some conditions, but also abusable. Stutman said: “You may know and trust your teen, but do you know her or his friends?”
-We are winning the overall drug war, because drug use is down.
-We are losing the drug war, because drug dependency and death from overdose are up.
-WHY? Age of first use is lower than it was in 2007 when the stats for overall U.S. drug use went down by 30%
-68% of high schoolers interviewed described their “biggest stress” as DRUGS. It wasn’t drugs they feared; it was being approached to use, and being unable to say no. DARE, a police program of drug resistance education, has had little impact.
-College drug use combines often with alcohol. Every day (all 365) a college student goes from campus to an emergency room because of a drug-related incident:alcohol poisoning or drug overdose, not to mention rape.
-NO ONE CAN IDENTIFY AN OPIODE ADDICT!  Stutman, an expert undercover agent, could, on observation, pick out addicts, but not opioid addicts.They are successful in traditional ways. Rush Limbaugh, for instance, admitted to being oxycontin-dependent for 5 years. All that time he had a regular radio show. Never mind his politics, his condition was drug-impaired. No one knew.
- White teens use 2-3 times more drugs than black kids. Think medicine chest.
-Urban problem? Alaska and Montana have the highest percentages of drug addiction.
- Sports are not a safe shelter, team sports being the most vulnerable, football the worst.
-“WE (name any group, Jews, Catholics, Swedes, abstainers, etc.) don’t do drugs.” ALL kids are at risk.
-The U.S. prescribes more opioides for pain than any other country in the world. #2 is Denmark.
-Pain responds just as well to other non-narcotic medications, such as physician-recommended combinations of acetaminophine and ibuprofen every 3 hours.
-AA and other 12-step groups are support groups for the disease of addiction, NOT treatment. There are now medications that help control symptoms, like cravings, and even death by overdose.

A dramatic story: Stutpen received a request from a woman in Florida who asked if she could deliver a very short message after his talk to parents. He checked her credentials and said yes. She had six sentences, with props.

A final story: The President of Marquette University in Milwaukee, a Jesuit institution, organized an evening talk on addiction and invited all parents. The invitation threatened parents:  RSVP required. If you can’t come to this evening we are recording it and will send you a video. If you don’t respond, your student will show up for classes and will not be admitted until we have a word from you. Amen!

Pray for people in bondage to addiction, out loud! —whether you know one or not. And don't let "those poor people"just meet in your church basements or be confined to your own innermost disdain. Bring the upstairs and the downstairs together. Bring the inside and the outside together.
Understand your own codependent behaviors. Listen to your kids. Don't just talk to them.
Read about what the Gloucester, Massachusetts Police Department’s initiative NOT to charge any individual who comes to the police department for help with addiction. Police Chief, Leonard Campanello, introduced the initiative in June, 2015  with a question: What is one life worth to you? 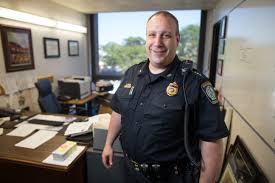 “Law enforcement,” Campanello wrote, does not have the right to judge that life. We believe in second chances, and third chances, and in starting over. Addiction is not a crime.” His site has over one million hits and counting.
There have been many addicts who have responded; they have been assessed and treated, using any and all available resources. The people and the politicians are behind this effort.
Connect with other citizens in your communities to have an evening discussion on this issue.

Chief Campanello is married and is a father. He has adopted many new "sons" and "daughters" thanks to this non-traditional, gracious, and, yes, godly, innovation. Happy Father's Day, Chief.